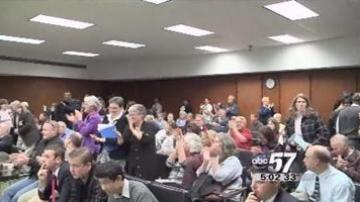 At the council meeting Mayor Pete Buttigieg was one of the first people to speak in favor of the ordinance. He was followed by people on both sides of the argument. Those against the bill called the language too vague. They said gender identity isn't as easy to distinguish as other protected classes like race or gender. Some people shared personal stories of discrimination.

Many who crowded inside of the meeting were pleased with the end result. "This is a good victory for the people of South Bend it does what needed to be done five years ago,” said Rick Sutton, President of Indiana Equality Action. “It's the kind of action that people of South Bend can be proud of. It'll make it a progressive first class city."

Once Mayor Buttigieg signs the ordinance, it will go into effect April 6th.