Hundreds march against violence in Elkhart 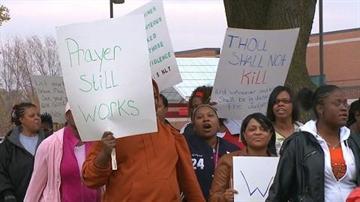 ELKHART, Ind. – An estimated 500 people took to the streets of Elkhart, Wednesday night. They marched, sang, and prayed down Benham Avenue bringing a message of reducing violence with them.

A group of inter-denominational pastors organized the prayer-march using word of mouth and social media.

The event was spurred on by recent violence in Elkhart and surrounding communities, including the shooting death of Ariana Pendleton, 19, a few weeks prior.

Of the hundreds that showed up, many were enthusiastic in their support. Some carried signs with scripture written on them. Other just lifted their voices in song.

Along the route, the group stopped and prayed at the Housing Authority on Benham Avenue, and again at the old Roosevelt School.

A final gathering was held on the steps of Agape Missionary Baptist Church, where the march began. There, head pastor Dannell Brown, spoke a closing benediction and the crowd disbursed a little more than an hour after it gathered.

Marchers ABC 57 talked to say the demonstration as a way to show unity and create a conversation in the community.

They also say, they know one march will not change the world. They will look to build on momentum coming away from Wednesday nights prayer-march. “All we are interested in today is causing a conversation to go on that says: if this doesn’t work, what does?” said Brown.