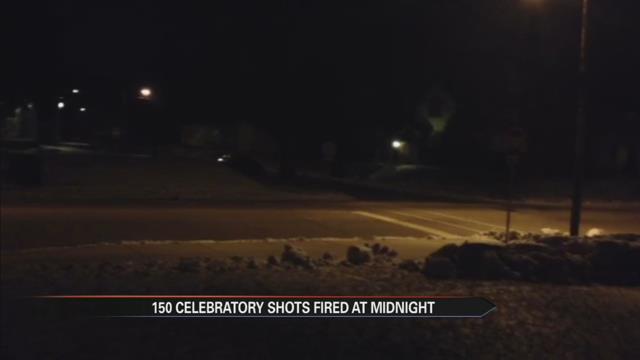 Fireworks typically rule the skies on New Year’s Day but within the first few seconds of 2016 in South Bend, gun shots were fired into the night sky hundreds of times.

For the last several years, celebratory gun fire in South Bend has become a tradition when the clock strikes midnight on New Year’s Day.

This year the South Bend Common Council amended an ordinance that set a fine at $2500 for shooting a gun irresponsibly that went into effect on December 25.

But even still, to ring in the new year, people in South Bend fired hundreds of celebratory gun shots into the air.

Some, just a block away from where ABC 57 was stationed in a vehicle with Dieter on the corner of Wilber and Vassar streets.

Within the first 7 minutes of 2016 in South Bend, Dieter counted at least 150 shots fired.

Gun fire from revolvers, semi-automatics, and shotguns were all heard by the former cop.

“I think it happens in South Bend more than in other communities around here, especially on this side of town. If you want to dissect why it happens, that’ll be a whole different story to find out why but it’s something that is bad for South Bend,” said Dieter.

The gun shots finally started to fade away just before 12:20 on Friday morning, but Dieter said people would be firing their weapons for the next several hours at a slower rate.

South Bend Police say no arrests have been made and no citations were handed out for the celebratory gun fire but that could change after investigations are made into the incidents over the next several days.