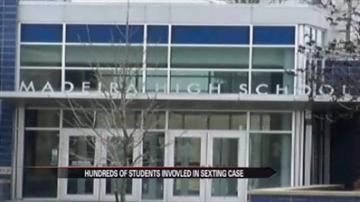 MADEIRA, Ohio -- Hundreds of teenagers at one Ohio school were involved in a sexting case and now dozens could be facing felony charges.

The students were caught with nude and sexual photos on their cell phones over the last several weeks.

It is a second degree felony to send a photo in such a way but none of the girls were charged.

"Since none of the parents wanted to prosecute the juvenile prosecutor told us no victim, no crime," said Chief Frank Maupin, Madeira police.

The principal of the school said he has tried to be proactive about this type of situation.