Hundreds of whales dead after mass stranding in New Zealand 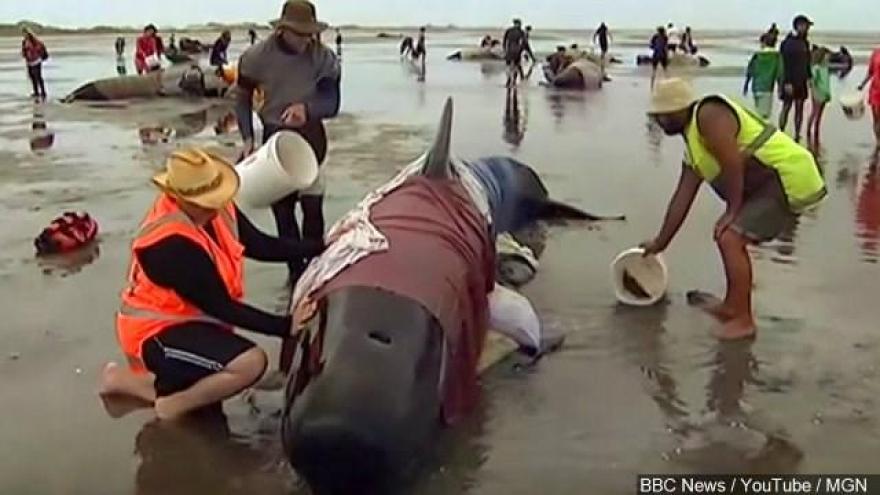 (CNN) -- Desperate efforts are underway to save dozens of pilot whales still alive after hundreds stranded themselves on a New Zealand beach, in the third largest mass stranding in the country's history.

At least 250 whales were already dead of 400 found beached on Farewell Spit in Golden Bay on the tip of the South Island Friday, the Department of Conservation said in a statement.

Rescuers attempted to refloat more than 100 whales mid-morning, of which about 50 returned to sea.

However, another 80 to 90 whales who were freed re-stranded themselves in the same place just five hours later, Inwood said.

Hundreds of locals turned out to help keep the whales cool.

According to Inwood, the area regularly saw beached whales and many residents were already trained in keeping the animals comfortable and helping to refloat them.

"Lots of people will be there pretty quick and already have the knowledge and training to help effectively," she said.

Work will stop overnight for the safety of volunteers, who could be in danger around the large, stressed animals.

'This is a huge one'

The whales were first spotted in the water late on Thursday night, by a department staffer, before being found on Farewell Spit on Friday morning.

"Normally (they) are between November and March and it's not many years we don't have one. (But) obviously this is a huge one compared to most years ... mostly they're in ones and twos," she said.

The largest whale stranding in New Zealand took place in 1918, when 1,000 whales stranded themselves on Chatham Islands.

"You don't usually get this many traveling at once, we have 180 once before but I think a lot of (answers as to why) are unknown really," Inwood said. "There's a lot of different theories."