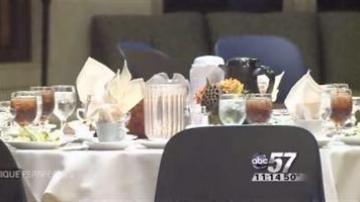 SOUTH BEND, Ind. --  People were randomly split into different social classes, so that meant some people ate like kings and queens, while others only had rice and water for dinner on Tuesday night.

A comfy chair, a nicely set table, a starter salad, a choice of beef or chicken, and of course dessert was the feast of the upper class at the hunger banquet at Saint Mary's College.  Students in the lower class did not get the five-star treatment.

"I was in the lower class and I had nice meal of rice and water and I had to sit on the floor," said student Mauve Curley.

The purpose of the Hunger Banquet was not only to raise money for food for the Red Cross but also to teach students what it means to be hungry.

Student Remi White was placed in the upper class and she says being seperated into social groups made her see that people everywhere are suffering from hunger, even her neighbors.

"I couldn't help but feel guilty eating a four-course meal and watching my peers having just rice and water to drink," said White.

Student Mauve Curley who was placed in poverty says her stomach was left empty, but she does have a better appreciation for what she does have.

"Personally, I never have to fast from a meal, so having this experience with my friends, it just makes me appreciative of the thingsIi do get to have every day," said Curley.

On Tuesday, the students at Saint Mary's raised over $1,400 for the fight against hunger.