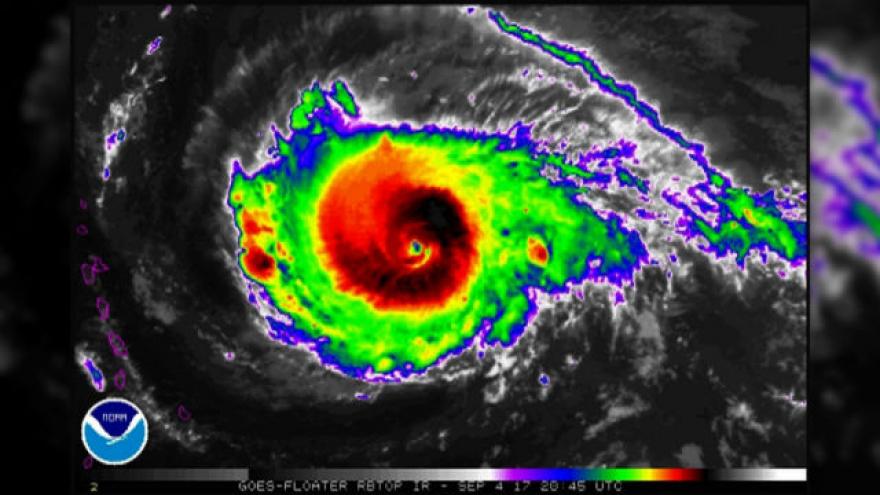 (CNN) -- Hurricane Irma has strengthened into an "extremely dangerous" Category 5 storm, the National Hurricane Center said, threatening to slam into northeastern Caribbean islands and Puerto Rico by Wednesday before possibly taking aim at the US mainland.

Irma was churning Tuesday morning in the Atlantic about 270 miles east of Antigua and Barbuda, heading west with maximum sustained winds of 175 mph -- well above the 157 mph threshold for a Category 5 -- the hurricane center said.

The storm's forecast track currently has it near or over Antigua and Barbuda by late Tuesday or early Wednesday, and the Virgin Islands and Puerto Rico on Wednesday afternoon.

"Some fluctuations in intensity are likely during the next day or two, but Irma is forecast to remain a powerful Category 4 or 5 hurricane during the next couple of days," the center said.

It is still too early to tell the exact impact Irma will have on the United States.

Computer models show the system eventually heading toward Cuba and possibly turning north toward Florida by the weekend.

While Irma's exact path is uncertain, several islands in the Caribbean as well as Florida are bracing for the storm.

After declaring a state of emergency all across Florida, Gov. Rick Scott said President Donald Trump had "offered the full resources of the federal government as Floridians prepare for Hurricane Irma."

"In Florida, we always prepare for the worst and hope for the best, and while the exact path of Irma is not absolutely known at this time, we cannot afford to not be prepared," Scott said in a statement.

Hundreds of people rushed to the stores, emptying shelves of food and drinking water just as Puerto Rico Gov. Ricardo Rosselló declared a state of emergency and activated the National Guard on Monday.

For hours, people also lined up outside hardware stores hoping to get plywood, batteries and power generators. If Irma knocks out power, Puerto Ricans said they are worried it would take weeks or months before the power is restored.

"It (power) is something absolutely necessary, especially due to Puerto Rico's weather. We need to have the A/C or a fan on all night," a woman told CNN affiliate WAPA.

One of those factors is the shortage of employees. Many workers recently retired or left their jobs for better prospects in the US mainland, Ramos Rodríguez said.

Public schools and officials at the University of Puerto Rico campuses have canceled classes, and many businesses remain closed.

Puerto Rico and a string of Caribbean islands are under hurricane warnings, including Antigua and Barbuda; the British and US Virgin Islands; Anguilla; Montserrat; St. Kitts; Nevis; Saba; St. Eustatius; St. Martin/Sint Maarten; and St. Barts, the hurricane center said.

Read: Hurricane Irma could be next weather disaster

The warnings are usually issued to areas that are expected to eventually experience hurricane-force winds (at least 74 mph), with the expectation that they would get tropical-storm-force winds of at least 39 mph about 36 hours after the alert goes into effect.

"Make a U-turn and die in the ocean, Irma. The Caribbean islands don't need more problems!" Twitter user mujertropical wrote about the storm.

By the weekend, it's possible that Irma could start heading to eastern Florida and also farther up the East Coast, CNN meteorologist and weather anchor Pedram Javaheri said.

"Everyone wants to see this at least meander away from the United States. The strength, the positioning, the timing of that troughs coming in to the eastern coastline will dictate exactly where Irma ends up," Javaheri said.

In Miami, supermarkets are already selling out on water and nonperishable food. People are trying to beat the rush in case Irma makes landfall.

"I've been through hurricanes and they're like 'Oh it's going to hit right here' and then it hits 30, 40 miles up the coast and it kind of changes the way everything goes so better safe than sorry," Greg Andrews told CNN affiliate WPLG.

Why Irma could be especially intense

Irma is a classic "Cape Verde hurricane," meaning it formed in the far eastern Atlantic, near the Cape Verde Islands (now known as the Cabo Verde Islands), before tracking all the way across the Atlantic, CNN meteorologist Brandon Miller said.

And Cape Verde storms frequently become some of the largest and most intense hurricanes. Examples include Hurricane Hugo, Hurricane Floyd and Hurricane Ivan.