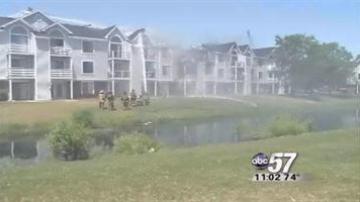 SOUTH BEND, Ind. –Brenda Bissell, a Hurwich Farms resident, said she panicked when she got a call on Friday from her uncle, who is a firefighter.

“He said Hurwich Farms has a fire.  I was wondering if it was your building," said Bissell.

“I said well I will tell you in about 15 minutes when I get home," said Bissell.

Luckily, it was not her apartment, but Bissell said it still frightens her that a fire happened so close to her home.

“Yeah, it is crazy.  Half the building is demolished," said Bissell.

Bissell moved to Hurwich Farms to get away from apartment fires.

“I actually lived at Castle Point for a while, and there were four or five fires there," said Bissell.

He says usually fires at apartments complexes are the fault of the people who live there, but he says newer apartments do have a slight edge when it comes to fire protection, because fire codes have changed over the years.

“An apartment complex built in 2012 will have more stringent guidelines than something built in the 60’s," said Gerndt.

Bissell said Hurwich Farms does provide a fire extinguisher and smoke detector, but she says after yesterday’s fire, she thinks the complex should go that extra mile to protect its tenants.

“I think they could do a little more, like install a sprinkler system or something," said Gerndt.