If Congress doesn't act, milk could double in price 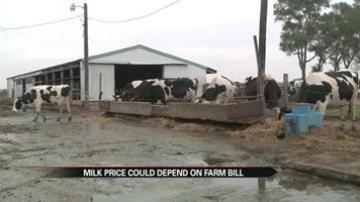 MISHAWAKA, Ind. -- If Congress can't work together you might be paying more for milk. Congress has until the end of the year to reach a deal on the farm bill or decades old price supports will expire. Those supports help farmers keep prices stable in times of economic hardship. If they expire, the cost of milk could double.

It's a dirty job - and one that requires passion.

But these days, she finds herself worrying about more than just her animals.

"We started hearing discussions about the farm bill at least two years ago," said Troxel.

Troxel is just one farmer who's following the actions of congress this week.

Legislators are meeting with the hopes of passing a $500 billion bill that has widespread impact.

"I think some people look at the size and the amount of the farm bill and think that's all going to farmers and that's just absolutely not true. There's conservation programs in there, there's ag-programs, and there's nutrition programs," said Troxel.

But Congress can't seem to agree on how much money to spend where.

In the meantime, decades old price supports have expired.

"When feed prices were higher than the cost of production, there was a formula that would kick in and we would get some money," said Troxel.

Without that safety net, costs fluctuate.

If Congress doesn't act, milk could go up to $8 a gallon.

"It's hard enough to compete with the big stores that are getting semis full of milk," said Jim Riffle, owner of Mr. Fresh.

Riffle worries he could feel the hurt too. He sells milk out of his drive-through convenience store.

He says some people will always buy it, but once it gets too high - sales top off.

Lawmakers met for the first time formally on Wednesday to talk about this year's bill.

They're working to try and renew the last one passed in 2008. Parts of which expired last month.