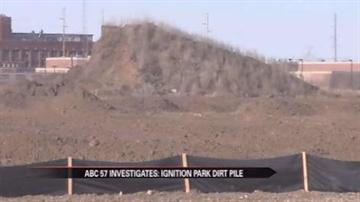 SOUTH BEND, Ind. -- For months, Ignition Park has sat undeveloped, but the sudden appearance of workers on the site have many wondering if a new business could be moving in.

All it takes is a drive down Sample Street to see this temporary landmark.

They city says they're grading the land to make it more marketable for potential businesses looking to move into Ignition Park.

For months, the mound of dirt has been an eyesore for the City of South Bend.

So it was a welcome surprise when city officials decided to grade the site.

"It's even better that people really understand the significance of a good presentation and aesthetics," said Davis. "So, I am thrilled it's happening now."

While everyone can agree something needs to be done with the dirt. Community members want to know why the soil is not just being removed.

In 2003, the city learned the soil was contaminated and then filed a lawsuit against the former property owners to pay for the clean up costs to get rid of it.

Local business owners told ABC 57, the city will have a hard time finding someone to buy  and develop the land if it's contaminated.

We called the mayor's office to see what is being done with the site to make it more marketable to businesses, but so far our calls have not been returned.