Illinois governor may bring in National Guard to end violence 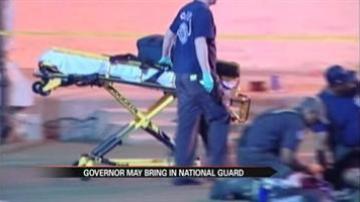 CHICAGO -- Illinois' governor is considering bringing in the National Guard to put an end to the deadly gun violence in the city's streets.

The move follows a rash of violence in the city including a park shooting that injured 13 people, including a three-year-old child who was shot in the face.

Chicago's Mayor Rahm Emanuel has said he is frustrated that the city has not been able to solve the problem of gang violence.

"We will not allow children in the city of Chicago to have their youthfulness, their optimism, their hope taken from them," said Mayor Emanuel.

The numbers of Chicago homicides are actually down compared to last year by 21 percent.