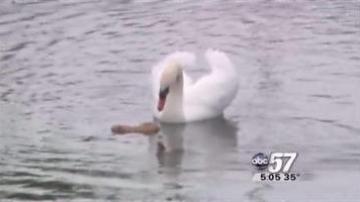 DES PLAINES, Ill. -- An Illinois man is dead after an encounter with an angry swan.

Investigators say he was in a kayak in a Chicago pond when the swan attacked. Apparently he kept attacking the guy until he drowned.

Ironically enough the 37-year-old man worked for a company that uses swans and dogs to keep geese away from condo areas. He was checking on the animals this weekend when police say the swan went after him.

"His kayak wasn't upside down, but upwards,” said Daniel Gamanov. “You could see the tip of it."

Investigators think the man must have gotten too close to the swan or its nesting area.