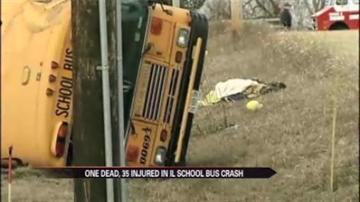 WADSWORTH, Ill. — One person is dead following a school bus crash in Illinois.

Thirty-five children were on that bus. None of them are seriously injured.

All 35 children were taken to the hospital, but school officials say all injuries are believed to be minor.

A witness says that the bus appeared to run a red light. The bus then t-boned a Jeep Wrangler.

The driver of that Jeep died from his injuries.