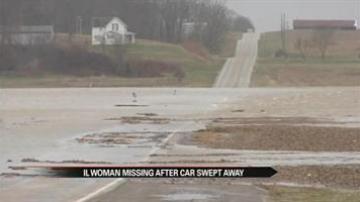 PIKE COUNTY, Ind. -- A woman from Illinois is still missing after her car was swept away by flood waters in southwest Indiana.

Officials spent the day searching for her after witnesses say she and her husband were in the car when it began to go under.

Her husband was rescued but the woman could not be pulled to safety.

Sheriff's deputies and emergency management officials used K9s and sonar to try to find the woman.

"The sheriff, conservation officers, and local people, several local people from this area were out there in their boats. The dive team people would even get in with them and go out and look," said Pike county resident Elaine Stafford.

The man rescued is currently at an Evansville hospital.