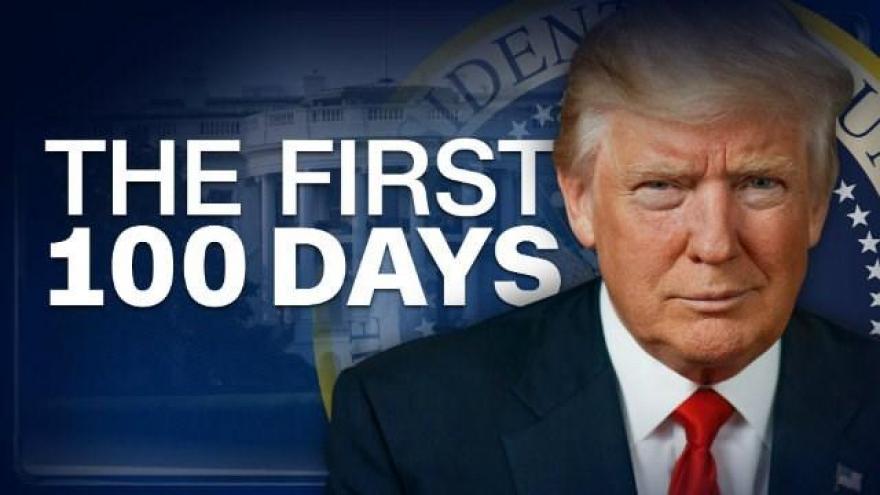 WASHINGTON (CNNMoney) -- A Washington outsider, President Trump has surrounded himself in his first 100 days in office with those he knows best: business executives.

The president has met regularly with dozens of CEOs, who have helped shape his views on how policy affects the economy and how to create jobs.

"I do strongly believe he is listening," Larry Fink, the CEO of the world's largest asset manager, BlackRock, said at a dinner earlier this month hosted by the Economic Club of Washington.

A majority of Trump's executive actions have targeted regulations or come to the aid of specific industries, like steel and aluminum. Seeking to reduce the burdens on banks, Trump has singled out specific parts of the 2010 Dodd-Frank financial overhaul law for review.

At the same time, Trump has failed to deliver on any major legislative priorities, most notably on the Republican promise to repeal and replace Obamacare. Details of many of his initiatives are scant, as evidenced this week when Mnuchin and Cohn unveiled a tax reform plan that they summarized in one page.

"Washington is now figuring out what is rhetoric and what is a promise he made on the campaign trail that he's going to keep," said one business executive, who spoke on the condition of anonymity.

And representatives in some business sectors say they have had trouble getting their message heard.

Bill Brown, the president of the National Association of Realtors, a trade group with 1.1 million members, opposes Trump's directive to reverse a cut on some mortgage premiums that would potentially make it more expensive to own a home.

Brown says he has made several attempts to set up a meeting with the president but has yet to meet with him. "We want to emphasize home ownership to the president," he said.

Other industry groups, such as the American Petroleum Institute and the Interstate Natural Gas Association of America, have objected to the president's "Buy American" plan because of its ripple effects. The plan calls for new oil pipelines to use American-made steel, which they say will ultimately drive costs higher.

But for now, executives are still largely happy with Trump. They know it will take time before any policy changes take root.

In public statements and interviews this week with CNNMoney, a number of executive and business lobbyists say they believe the central promise to loosen regulatory burdens on their businesses will eventually help boost their bottom lines.

JPMorgan CEO Jamie Dimon, a member of the president's economic council, said on a recent earnings call that any new administration experiences "ups and downs, wins and losses." He focused on Trump's stated "pro-growth agenda -- tax, infrastructure, regulatory reform -- and that is a good thing."

Dimon isn't alone. A survey of chief executives by the Conference Board showed executive confidence rose again in the first quarter to the highest it's been in 13 years.

The National Association of Manufacturers, a trade group representing 11,000 small and large companies, said 93% of members surveyed last month were positive about the economic outlook -- the highest in the survey's 20-year history.

Jay Timmons, the organization's president and chief executive, said members have responded strongly to Trump's plans to cut the corporate tax rate to 15%.

"He went directly at the problem we have. We are simply not as competitive because of how our tax are structured," said Timmons. "Frankly, we were pretty proud that he stood up for us."

The country was on the precipice of a global financial meltdown when former President Obama took office in 2009. Wall Street was at the center of it. Obama's chief aim after stabilizing things as to put safeguards in place so another crisis would never happen again. That eventually became Dodd-Frank, the largest regulatory overhaul since the Great Depression.

But Trump hates regulations and has pledged to do a "big number on Dodd-Frank."

Mnuchin has started to review regulations that could be stifling economic growth. Treasury Department staffers have hosted at least 20 focus groups, often with roughly 40 business leaders at a time, to hear ideas about how to provide regulatory relief to the financial sector.

Already, insurance giant MetLife has seized on Trump's decision to halt regulators from labeling any firm as too-big-to-fail until Treasury is done with its review. The company has asked a court to pause a lawsuit.