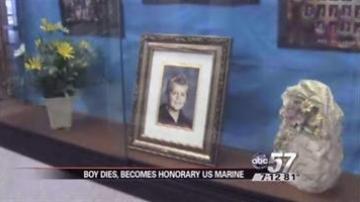 The 12-year-old fought off Leukemia since he was about 2-years-old.

Even though Green was cancer-free, the chemotherapy lowered his immune system.

The boy died on Saturday, from a fungus that attacked his brain.

Local Marines stepped in and gave Green Marine Navigator Wings, and they also made him an honorary member of the U.S. Marine Corps. David Snowberger, the boys father said, "They decided Cody, with the strength and honor and courage he showed through the whole thing, he should be a Marine."

For one Marine, that honor wasn't enough, so the night before Green passes, the Marine stood guard at his door at the hospital all night, for eight hours straight.