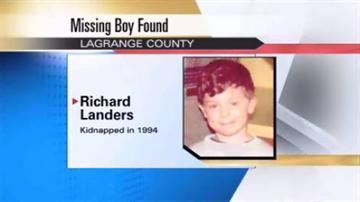 LAGRANGE, Ind. -- A LaGrange, Indiana, boy who disappeared nearly 18 years ago has been found alive and well in Minnesota.

Richard Landers was just 5-years-old in 1994 when he was allegedly kidnapped by his grandparents.

His stepfather gave Indiana State Police a copy of Landers' social security card in September, which led them to the now 24-year-old.

He is married and living in Long Prairie, Minnesota.

Charges against Landers' grandparents were dropped in 2008.