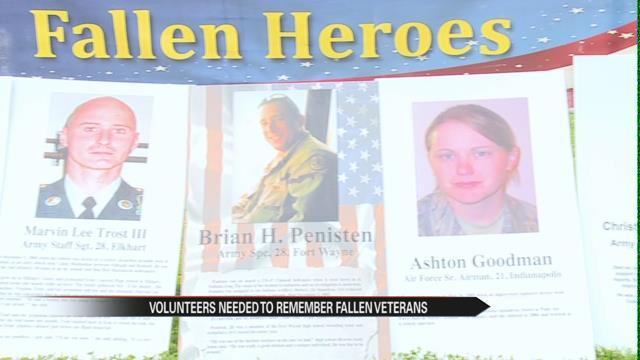 Indiana Fallen Heroes will be marching in Monday's South Bend Westside Memorial Day Parade and the group needs more volunteers to join them.

Each sign displays a photo and biography of a fallen Indiana veteran.

“My wife and I were marching in the parade a few years ago in LaPorte and David's wife and kids came out, with tears, again, coming down their faces, and asked to carry David down the street,” Addie said while holding a fallen soldier, David M. Heath's, sign.

Addie has been marching in patriotic parades around the state for five years.

For Monday's parade, he has about 205 signs ready to be carried.

“We want them all represented. No one gets left on the cart,” Addie said.

Folks can jump in during the parade or meet them at the Kmart on Western Avenue before the parade begins.

“We're looking to carry them all through the entire parade route,” Addie said.

The project is so important to Addie and his coworkers because some of the fallen soldiers have no living relatives.

One example is Jeannette L. Winters, of Gary, Indiana.

She was the first female Marine killed in action, and she has no close living relatives.

“This is one where in many ways the fallen heroes have become her family,” Paul Schlottman, the superintendent of Career Academy said.

“Regardless of the political side we come from in this country, this great democracy, really the bottom line, the underpinning of all of it is the blood that's been shed for our freedom.  If one day a year,  couple days a year we can carry these folks and these soldiers and meaningfully honor them, then I think it's the very least we can do,” Addie said.
Share this article: