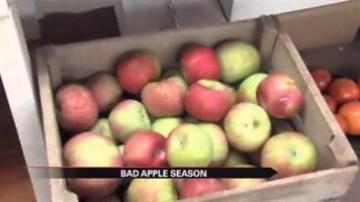 INDIANA -- Farmers in Indiana are saying that 2012 could be one of the worst apple producing seasons ever.

The apple crop was hit hard, especially in central Indiana after a warm spring led to an early bloom. But an April cold snap ruined much of Indiana's apple crops.

Some orchards lost 50 to 90 percent of their crop this year.

The fall tradition of families picking applies has forced some farmers to take action. Some farms have canceled U-Picks altogether while other farms are having to ship apples in to meet demand.

"There is just aren't enough apples out there to really make it worthwhile for folks to go out there and have to walk a long way and find a few apples," said Tom Tuttle of Tuttle Orchard.

Tuttle also said that he and apple farmers cannot remember year like this one.

Tuttle's Orchard still has some apples for sale but many had to be shipped from Michigan as well as other parts of Indiana.