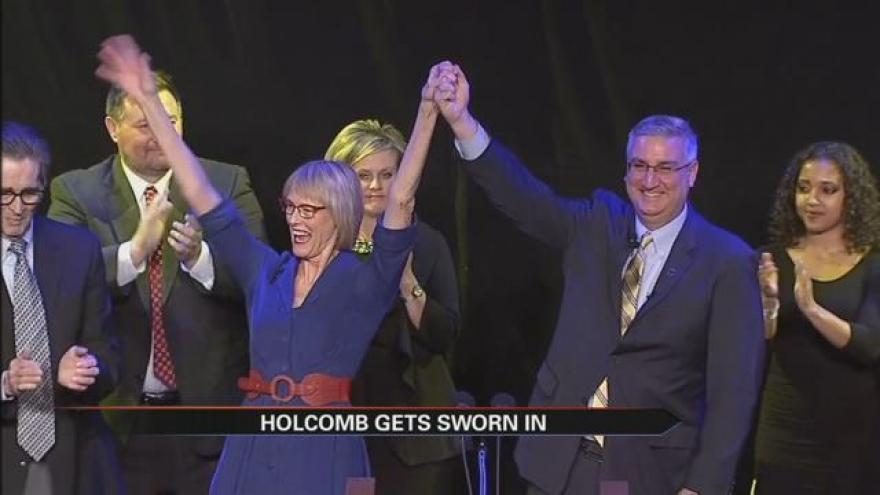 As 2017 begins, so does the tenure of Indiana’s new governor, Eric Holcomb.

The lieutenant governor was sworn into the state’s top job Monday morning in Indianapolis.

“I am honored to accept the privilege and duty to serve you and the state that we all love,” Holcomb said during his address.

Holcomb even paid tribute to Pence, after serving under him for nearly a year.

“Our state’s loss is our country’s gain,” Holcomb said, speaking to Pence. “It says a lot about Indiana leadership that Mike is the sixth Hoosier to go on to serve as vice president of this great nation.”

He credited a ‘pioneer spirit’ that he said he will seek to nourish.

“This is where I will focus every day,” Holcomb said. “On ways to take our state to that next level. To make Indiana a place where people thrive. Where they can get a good, fulfilling, well-payed job and world class education. Where our kids are well taken care of. Where we have growing opportunities and the freedom to take advantage of them.”

Lieutenant Governor Suzanne Crouch was also sworn in during the ceremony.

After the inauguration, Vice President-elect Pence and his family departed Indiana for the final time and officially moved to Washington D.C.

I am honored to accept the privilege and duty to serve you and the state we all love.

At the outset, I want to recognize three people without whom I wouldn’t be here today, beginning with my wife, Janet.

All that I have accomplished has only been possible because of your love, your support, your wit and wisdom and, most importantly, your partnership.

I love you, and I look forward to sharing this next new adventure with you every step of the way.

There are certain fields in life where the best harbinger of success is to follow great predecessors.

By that measure, I’m one of most fortunate men ever to hold this office.

Twelve years ago, I sat side-by-side as Mitch Daniels became governor and—through his focus, vision and fearless leadership—Hoosiers came to not only accept change, but to expect it. The results of those early reforms fueled our current greatness.

Mike Pence took that momentum and kept it going with more Hoosiers employed in the private sector today than at any time in our history.

Our state’s loss is our country’s gain; it says a lot about Indiana leadership that Mike is the sixth Hoosier to go on to serve as Vice President of our great Nation.

The best way I know how to show my appreciation for the faith you both placed in me is to uphold the same courage, conviction and commitment you each showed in your own ways every day in this office.

Ladies and Gentlemen, today marks the 51st time in our rich history that a new administration has taken this solemn oath, and for me it is an exciting opportunity.

Because I have the great fortune of being the first governor sworn into Indiana’s third century.

So it’s an entirely appropriate time to take stock of our past and look ahead to our future.

Our forbearers were pioneers.

They ventured into an uncertain, untamed wilderness where everything was at risk: their families, their futures, their very survival.

As daunting as the challenges were, they didn’t shrink from them.

They faced them head on.

They built homes and communities, planted fields, constructed canals and roads to connect themselves to one another and to the new country, and established laws to govern themselves to spark the opportunity for prosperity for all.

We tend to think of pioneers as people who "settle" a new territory.

But pioneers are also people who come up with new ideas or better ways of doing things.

Our forbearers were these kinds of pioneers, as well—with eyes always fixed on the future, wielding not only axes and ploughs but also ingenuity and a passion to improve.

Our very Constitution that our Hoosier Framers wrote in 1816 – the first year of statehood – is full of optimism, ambition, and generosity.

Among other things, it called for universal education and no slavery – far reaching ideas for the time.

And over the past two centuries, Hoosier pioneers blazed trails that have made a titanic difference to the people of Indiana and to the world.

We all know the story of...

Madam C.J. Walker paving the way for women in business

Or Gus Grissom, who made the heavens our new horizons and primed Americans to first land on the moon

One who's been on my mind lately was a young pastor who became this city’s longest-serving mayor, transforming what was derided as IndiaNOplace into IndiaSHOWplace—revitalizing our Capitol city and turning Indianapolis into a sports capital.

Such was Bill Hudnut’s vision and passion that he not only lured the Colts to Indianapolis but built a stadium before landing the team!

What all of these pioneers have in common are the same traits that have been part of our DNA for 200 years: self-reliance, grit, a can-do attitude, a sense of fairness, and a spirit of generosity.

Now, I know that sharing our strengths doesn’t always come naturally to us Hoosiers because of another trait we share: humility.

Ironically, Hollywood does it for us.

Think of Rudy or Breaking Away. One that’s less well known is Madison and, of course, there’s Hoosiers.

They’re all stories of perseverance, of David not just taking on but slaying Goliath, of the underdog punching above its weight class through hard work, utilizing their strengths, playing by the rules, getting the basics right.

That’s become our story—the Indiana story—and what Indiana has globally grown to be known for.

Today we see the results:

Our state’s finances are sound.

We're one of only 12 states with a triple-A bond rating.

And, we’re keeping nearly 2 billion dollars in reserves in a rainy day fund, all the while maintaining a low cost of living and housing.

Our unemployment rate is lower than the national average, and—as I mentioned at the outset—there are more Hoosiers working today than at any other time.

These numbers tell a compelling story:

We’ve become national leaders in business growth, and we’ve been landing jobs and business relocations that—10 or 12 years ago—were going to Austin or Boston or the Silicon Valley—practically anywhere but here.

That’s no longer the case.

Today, Indiana has three times the high-tech job growth as the nation as a whole.

Warsaw is the Silicon Valley of orthopedics, generating one-third of that industry’s worldwide business.

And our great state is among the nation’s leaders in life-science exports.

In fact, of the 50 industries the Brookings Institute says will drive growth in the 21st century, Indiana is a player in 45 of them.

They’re coming to Indiana now, because our costs of living and doing business are low and the quality of our workforce is high.

In fact, our employers can recruit and groom future employees right out of our world-class universities and colleges.

But, as any champion will tell you, winning one year does not guarantee repeating the next.

Despite our standing, despite our ongoing momentum, we can’t afford to get complacent or take our eyes off the ball.

Too many Hoosiers and their families feel they’ve been left out or are in danger of being left behind.

Too many are not participating in today’s economy or getting a quality education—or are struggling with the strangling grip of drugs.

Too many Hoosier grads explore opportunities outside our state line.

And too many Hoosier businesses are having trouble finding the skilled workers they need to grow.

While Indiana remains an agricultural powerhouse, our average farmer is 58.

While we're Number 1 in the nation in manufacturing, the competition is fierce—not only from 49 states but from countries around the globe.

Moreover, in the next 10 years, we'll need to find one million new skilled workers to replace the 700,000 baby boomers who will retire—plus the 300,000 new jobs we will need to create.

Rather than ease up, we must hammer down and maintain that pioneer spirit.

This is where I will focus every day…on ways to take our state to the next level: To make Indiana a place where people thrive. Where they can get a good, fulfilling, well-paid job and a world-class education. Where our kids are well-taken care of. Where we have growing opportunities and the freedom to take advantage of them.

And even as we invest to make our state stronger, we will apply our proven and proud Hoosier drive and common sense to ensure we deliver good government at great taxpayer value.

In the weeks and months ahead, men and women from all across our state will answer the call of service to make sure we hit these targets.

Two hundred years ago, our pioneer forbearers came to this territory with little but their aspirations, determination, and—yes—their faith.

Over the intervening years, they endured epidemics and depressions, a Civil War, and even two World Wars.

Like the contentious debates and sharp divisions found in our political arena today, they didn’t always agree on which direction or which steps to take.

Yet they worked to forge a consensus and continually adapted by keeping their focus on ways to make life better for their families and their neighbors.

They transformed the economy to meet the changing world—evolving from agriculture to manufacturing to today include aerospace, life sciences, and advanced manufacturing based on high-tech automation—even artificial intelligence.

In 1821, just five years after we became our own state, a speaker at a Fourth of July celebration down in Martin County said, “The purest patriotism is to convert the gloomy woods into fields waving with luxuriant harvests.”

Hoosiers have been practicing that kind of patriotism for 200 years.

And, now we’re called to do it again.

Our harvests today might include driverless cars and pilotless barges, or stronger, more flexible metals, or breakthroughs for Alzheimer’s disease.

Whatever our harvests are, we Hoosiers will jump to work together, ploughing and sowing and nourishing—and making sure they too are luxuriant.

I thank everyone who is here today and all those listening from afar on your mobile device for your love of Indiana and the charge you’ve given me.

Together, we are the pioneers who will take our state to the next level.

And I'm chomping at the bit to start!