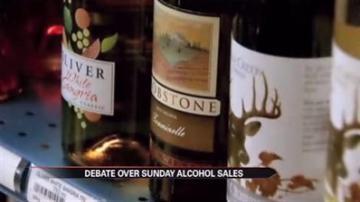 INDIANAPOLIS — You may soon be able to buy alcohol on Sundays in Indiana.

It is an issue that has been debated for years and now it is open for debate at the statehouse.

Indiana is the last state in the country where you can buy alcohol on Sunday in a restaurant, but not at a store.

Those against it say it would force mom-and-pop shops out of business.

"So unfortunately, for the little bit of convenience that Hoosiers would get out of it, it would cost jobs," said Ray Cox, liquor store owner.

Those who support the change say Indiana should encourage competition.

A hearing will be held later this week.