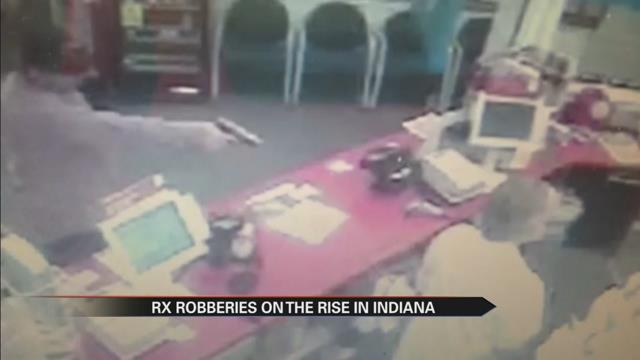 The United States Drug Enforcement Administration reports pharmacies all across the country are seeing an increase in armed robberies.

Unfortunately, Indiana leads the nation in these robberies.

“I know the DEA recently released statistics saying that Indiana is number one in pharmacy robberies,” said Kellems.

There have been nearly 70 pharmacy robberies in Indiana since the beginning of 2015.

LaPorte pharmacies are no stranger to the crime.

Luckily, no one was hurt.

“Hydrocodone, Oxycodone. Things that are basically very strong pain killers. Always prescription, nothing over the counter. And that’s what drives these people to go rob the pharmacies,” Kellems explained.

Kellems said prescription drugs seem to be the basis for the heroin epidemic in LaPorte County.

“It’s not uncommon for people to pay $5 and $10 and $15 for one single Hydrocodone pill,” added Kellems.

Police said the suspects are often abusers desperate for a high.

But organized crime groups have also been found responsible.

“Law enforcement has a heightened sense of awareness because of it. We work very closely with the drug administration,” said Kellems.

Police said pharmacies are doubling up on site security.

Some have even added robbery trigger alarms.