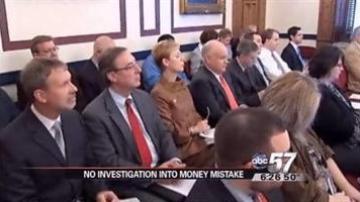 Indiana made a $320 million mistake, and state democrats are calling for an investigation.

But that's not going to happen.

At a state budget committee meeting on Wednesday morning, the Republican majority rejected the proposal.

Because of a coding error in 2007, corporate income taxes paid by electronic check were mistakenly put into a holding account, and were not credited to the General Fund until last week.

"And I think when you have an error of this magnitude, I don't think the citizens of the State of Indiana, at this point, will be satisfied with the investigation," said John Broden, (D) South Bend.

On Wednesday, Broden also compared the state's investigation to "The fox guarding the henhouse."