Indiana man falls to his death at Silver Beach Hotel 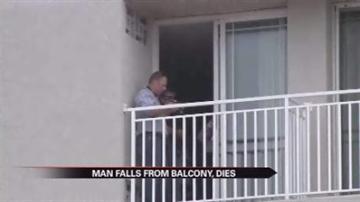 Sunday investigators were taking pictures of the railing at Silver Beach Hotel.

They believe alcohol may be a factor in the death, but it is still an ongoing investigation.

Michael Sawula is staying at the hotel in St. Joe with his family and said it seemed like a freak accident.

Sawula said, “We’re really surprised and we’ve been praying for the gentleman’s family because we wouldn’t want this to happen to anybody in any type of situation. I hope they are going to be okay.”

Saturday night at 8:45pm officers responded to a 911 call at the Silver Beach Hotel on a report that a man had fallen from a balcony on the fifth floor.

CPR was administered on the scene but the victim was unresponsive.

He was rushed to Lakeland Medical Center in St. Joseph where he was pronounced dead.

Michael Sawula said he was worried when they got back from dinner because four police cars were in the hotel's parking lot.

Sawula said, “We arrived back at the hotel after dinner around 9:30pm after everything occurred. The police were just incredible, they had everything contained but it’s just really a tragedy that something like this could happen and we weren’t expecting it.”

Silver Beach Hotel said they would not disclose the man’s name at this time.

In a press release they said they are deeply saddened by the accident and the victim was a regular guest at their hotel.