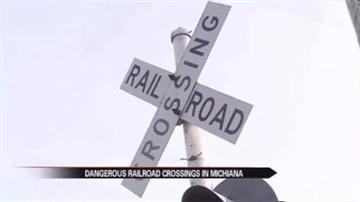 There are a large number of railroad crossings in Michiana, but two stand out as having the most accidents. One is in Elkhart and the other is in Warsaw.

Railroad crossings can be very dangerous. According to the Federal Railroad Administration, Indiana is in the top 15 in the nation for accidents.

"Indiana does have a lot of accidents when it comes to trains and railroad traffic. And we have a lot of railroad crossings, and we also have a lot of track miles, so you mix that with the amount of highway traffic we have and that is a significant amount in our state. We are usually in the top five for crossing accidents,' said Jessica Allen Feder, Executive Director of Indiana Operation Lifesaver.

According to online accident reports from the FRA, the railroad crossing on Market Street in Warsaw, and the one on Main Street in Elkhart have the highest number of accidents in Michiana.

In March, there was an accident at the Market Street crossing in Warsaw. The vehicle's driver wasn't hurt.

"In this past year in 2013 I have personally seen two accidents, maybe three," said Eduardo Alvarez, sales agent in Elkhart.

He works near the tracks.

"Cars get too close, they drive too fast, they want to beat the train, and they end up missing the other cars barely," said Alvarez.

Feder says it's not the crossings themselves that are significant. She says the high number of incidents is most likely because of the large number of trains and high traffic in the state.

"It would help if we didn't have so many crossings in Indiana, it would help if they closed some of them. I mean we obviously work on this daily, but when you are a top five state, you know it's hard to break that cycle," said Feder.

Railroad accidents can occur for any number of reasons from engineering problems to line of sight with drivers and cars.

The FRA regulates states that are in the top 15 for accidents and their Department of Transportation must come up with an action plan to improve their accident ratings.

Aug 25 -31 is Railroad Safety Week. State troopers and local law enforcement will be out to watch the public to make sure they are all obeying the law.