Indiana ranks second in the country for train crossing collisions 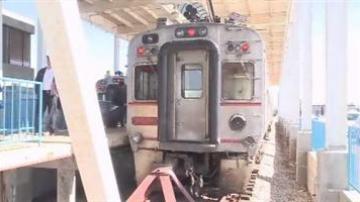 SOUTH BEND, Ind. -- After Sunday night's collision the South Shore train involved was deemed safe enough to make its way back to the South Bend Airport, where it was parked overnight.

The National Transportation Safety Board investigates all railway accidents. ABC 57 attempted to confirm NTSB investigators were on the scene of the accident, however, the agency's voice mail recording stated it was closed for the holiday on Monday.

Around noon Monday our ABC 57 crew stopped out at the South Bend Airport where the train was stationed on the extra South Shore track. At first glance from the front there didn't appear to be much damage. Upon a closer look the damage was evident.

The front left headlight was broken, the left side metal staircase into the compartment was bent, cables underneath the train were held together with a white piece of rope, and skid marks stretched along a 20 foot section of its left side.

However, on our return trip back at 3:30p.m. the train was gone.

NICTD South Shore Marketing Director John Parsons told ABC 57 that video of the accident was likely recorded, however technicians would need to retrieve the video card from the train and look at it for the collision investigation before he could determine if the media would be able to view it as well.

He said, "There was a lot of police here."

He and his wife heard the impact of the collision. However, they just thought it was the train shifting tracks. They didn't know an accident had happened until they noticed the flashing lights and sirens coming from the emergency vehicles.

Rodriguez said he has lived on Pine Road for the past 20 years.

When we asked him if other accidents have happened near the train tracks he said, "This is the first one as far as I know."

According to Operation Lifesaver, Inc. Indiana ranks sixth in the country with rail crossing fatalities in the country. There were ten vehicles crossing related deaths in 2011. As for crossing collisions the Hoosier state ranks second. There were 117 vehicle related accidents last year. Texas ranks number one with 202 deaths.

Ashley Childress who knew Ryan Voreis, the victim personally, thinks the numbers could be reduced if all crossings had crossing gates.

Rodriguez agrees, that one person losing their life is one to many. He too would like South Shore to add crossing gates like the Northfolk Southern tracks immediately following the South Shore tracks.

"Well after this accident there should be," he said.

According to INDOT 35 percent of Indiana railroad crossings have flashing lights and gates.