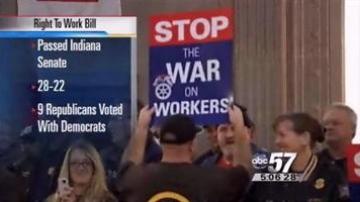 INDIANAPOLIS, Ind. – The Indiana Senate has passed the right-to-work bill.

The final vote was 28 to 22. Nine Republicans joined all 13 Democrats. They did finally show up to vote the controversial bill down, but that wasn't enough.

The house considered amendments to the same legislation Monday. They could vote later in the week.

Right-to-work bans mandatory union fees as part of employment. Democrats had been boycotting in protest for the past few weeks.