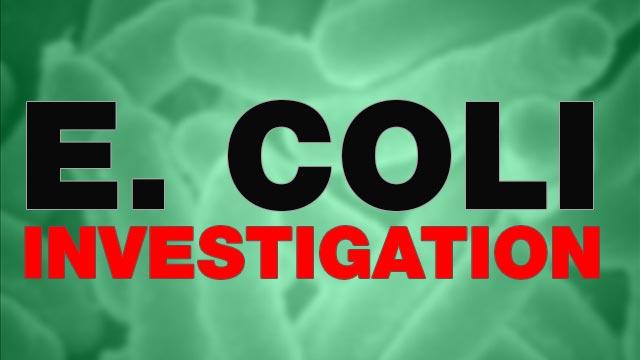 The Indiana State Department of Health held a conference call with members of the media on Friday to discuss the recent E. coli outbreak in Fulton County.

There are currently six cases being investigated and three have been confirmed as E. coli.

The outbreak includes several children who attend the same daycare, but that daycare has not been named.

Officials say they believe the E. coli was brought into the daycare and spread person to person, that the daycare was not the source of the infection.

The owners of the daycare have cleaned and disinfected the facility at least twice since the outbreak was identified and remains open.

Health officials will not identify the daycare because of confidentiality and privacy issues.

There is no link to a restaurant or water source. They believe if that were the case, there would be more cases.

The cases that are currently being investigated are not linked to the cases that were identified earlier this year.

They added it is possible they will never know the source of the contamination.

According to officials, summer is the season for E. coli outbreaks.

The speakers on the conference call included

According to Dr. Adams, the ISDH was notified of these cases late August 4 and began working with the local health departments and investigating on August 5.

So far there are six individual cases and three are confirmed.

Three of the cases are linked to the same daycare in Fulton County.

Just because the cases are related to a local daycare doesn't mean that's the source of the infection. It is likely someone brought it into the daycare and it moved from person to person.

No common link has been identified among all cases, but it is still an active and fluid investigation.

They believe there were no common water sources or restaurants because there would be a larger number of cases.

Laboratory testing at the state level has determined these cases are not related to cases identified earlier in the year.

There is no link between the fatal case and the daycare.

Media members were allowed to submit questions. The questions are in bold.

What makes this outbreak concerning?

General sources for this strain of E. coli include undercooked meat, unpasteurized milk, water contaminated by sewage, or from person to person (for instance, someone doesn’t wash hands after changing diapers or going to the bathroom).

This bacteria is carried in stool for up to two weeks even after person recovers.

They have not found a source for the outbreak yet.

Is this an outbreak or is the number unusual

This is the time of year E. coli infections most likely to occur. There is a summer seasonality.

They investigate when there are an excess number of cases in a given population.

The health department got involved because it is unusual to see several cases associated with the same location and they wanted to identify the source and prevent additional transmissions.

Has source been discovered?

At this point there is no conclusive source of contamination. The state is working with local health departments to identify source. They will be speaking with people involved and conducting laboratory tests.

The exact source may never be known.

Currently they have the six cases under investigation and have not seen any new cases.

How to keep family safe moving forward? (since we don’t know source)

Summer is a higher risk time of year.

When cooking vegetables, cook them for at least one minute.

Make sure beef is cooked fully.

Wash hands after going to the bathroom or changing diapers.

Wash hands if you're caring for someone who is sick.

Don’t swallow lake or pool water (spit out water as quickly as possible).

What should you do if someone you know is sick?

If someone thinks they're sick, possibly with E. coli, they should contact their health care provider right away. Make sure to ask the doctor to consider testing for E. coli. Let the doctor know when and where you suspect you were infected.

Again, the best ways to prevent it is frequent and thorough hand washing, especially after going to the restroom, changing diapers, touching animals at petting zoos and handling raw meat.

Don’t eat or drink anything near animal exhibit areas.

If you develop bloody diarrhea, go to doctor. Don’t take anti diarrheal without talking to doctor because it can make it worse

How is word being spread to those who may be affected?

The state is working with local health departments to inform the public.

On August 7, the state helped local health department draft a letter to daycare parents, helped write a press release, helped get a message to hospitals and labs in the area to be alert for patients with symptoms and to test for E coli.

They are also answering calls from the public and holding conference calls with the media.

Can this be called an outbreak?

The department has been considering it an outbreak because of the three cases related to the daycare, but the investigation is ongoing and they are continuing to gather information and are looking for any new cases.

Are children more at risk?

Children aren't any more at risk at getting the infection except they may not be as diligent about washing hands. They are more at risk for complications.

Children under 5 are at highest risk for complications including kidney issues. About 1 in 50 will develop complications, 25 percent have neurologic involvement.

What is status of the daycare, cleaning and is it still open?

Rhonda Barnett, the Fulton County Public Health Nurse says they have been working very closely with the daycare. It is open.

What are parents of children at the daycare being told?

If a child has fever, diarrhea, nausea , vomiting, they are not to take the child to daycare.

The children's stool must be tested and they are not allowed to come back until 24 hours after symptoms have subsided and after two negative stool samples.

The daycare is still open and operating. They are monitoring students for symptoms.

Three of the confirmed cases did come from the same daycare. There is no evidence the daycare is the source.

Visit the state's website for more information on E. coli

Dr. Adams says his heart goes out to the family that lost a child. They are doing everything in their power to make sure no one else suffers unnecessarily.