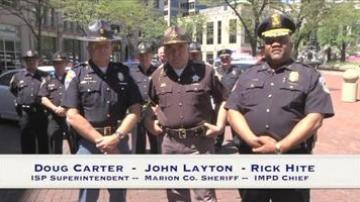 INDIANAPOLIS, Ind. -- The Indiana State Police have started their own YouTube channel.

They've released their first video called "We always get out of our car."

He was shot in July when he got out of his car and confronted an armed suspect.

The family of the suspected gunman criticized the officer saying he would not have been shot if he had stayed in his car.

The Indiana State Police responded in the video, saying they will not stop opening the door.