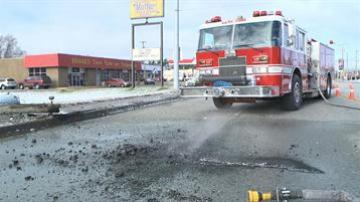 SOUTH BEND, Ind. -- Clean up crews swept debris from a crash near the state line Saturday.

"All of a sudden, we heard an explosion," Jan Madden, a neighbor, said.

When emergency responders arrived on scene, they saw a car totaled, and the road was on fire.

The transformer's oil got so hot, that even hours after the crash, the road was still smoking.

Witnesses say the crash came as a surprise.

"Shocking," Madden said. "It looked like the sun was on the ground blazing."

"Thank goodness there was a barrier there that kept her from coming into the store," Michelle Verstraete, a designer with Whims and Wishes, said.

The folks involved were from Tennessee.

Police said they were on their way to a hospital in a rush, after the passenger overdosed on prescription medication.

The damage was so bad, police had to shut down a portion of 933, and reroute traffic elsewhere.

"I've never been this close to an accident before," Verstraete said.

Investigations are still ongoing to see if the driver was under the influence as well.