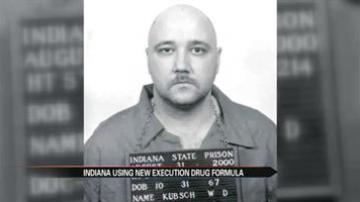 SOUTH BEND, Ind. -- Fourteen people are on death row in the state of Indiana. But the state has not executed any prisoner since 2009.  And the next time they do, they plan to use a cocktail for lethal injection that has never been used before.

The new drug is called Brevital, and it's part of a three step process the Department of Corrections says is completely painless.

Douglas Garrison with the Department of Corrections says the drug is appropriate to use for executions.

"It's a drug that's intended to cause deep and painless unconsciousness that is consistent with the use in the medical field when they put people to sleep before surgery," says Garrison.

The state of Indiana made the switch because of a shortage other available drugs, but officials say the options do essentially the same thing.

Wayne Kubsch, 47, is the only man from St. Joseph County sitting on death row.

Back in August of 2000, he was sentenced to death after being convicted for three murders, including his wife, her ex husband, and their ten year old son from that marriage.

His execution date was scheduled for April 6, 2011, but he has filed several appeals with the federal court, delaying his execution.

His most recent appeal came just five weeks ago.

And when his execution does come, the state of Indiana will use the new execution cocktail including brevital.

This move comes after the botched executions in both Ohio and Oklahoma. Drug makers are now refusing to sell their drug for the purpose of execution. The state of Indiana Department of Corrections says this is why they had to find a replacement.