Indiana will not recognize same-sex marriages performed in June 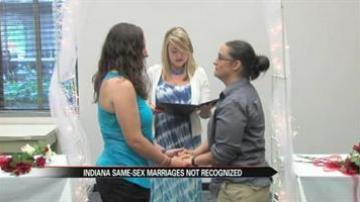 SOUTH BEND, Ind. -- The General Counsel to the governor sent a memo instructing state agencies to act as though same-sex marriages performed in June 2014 never happened.

On June 25, The US District Court struck down Indiana's statute defining marriage. The same day, the Attorney General filed an appeal of the ruling.

Hundreds of same-sex marriages were performed throughout Indiana.

Two days later, on July 27, the US Court of Appeals for the 7th Circuit issued a stay of the District Court's order pending the outcome of the appeal.

On July 1, the 7th Circuit lifted the stay regarding one same sex couple, Amy Sandler and Nikole Quasney, on an emergency basis.

According to a memo issued by Mark G. Ahearn, General Counsel to Governor Mike Pence, none of the other same-sex marriages can be recognized.

Ahearn wrote that Indiana's law defining marriage, "is in full force and effect and executive branch agencies are to execute their functions as though the US District Court Order of June 25, 2014 had not been issued."

All of the other marriages are to be treated as though they never happened, because of the stay granted by the US Court of Appeals for the 7th Circuit

Many of the same sex couples who were married in June said they thought their marriages would still be valid.

Because of the ruling, same sex couples who were married will not have the protections and benefits of marriage.

Kaity Fuja took photos of same-sex couples for free and got very close with many of the couples.

"It's a shame and it seems clear that eventually we'll be on the right side of history, but right now we're just not," said Fuja.

“I’m disappointed the state of Indiana has chosen not to acknowledge the hundreds of same-sex marriages that took place late last month. The legal process is underway in many states and I am confident that the courts will eventually side in favor of equality for all. We in South Bend will continue to embrace the diversity of our community and will continue to support all of our families as we support all couples who lovingly join in marriage.”