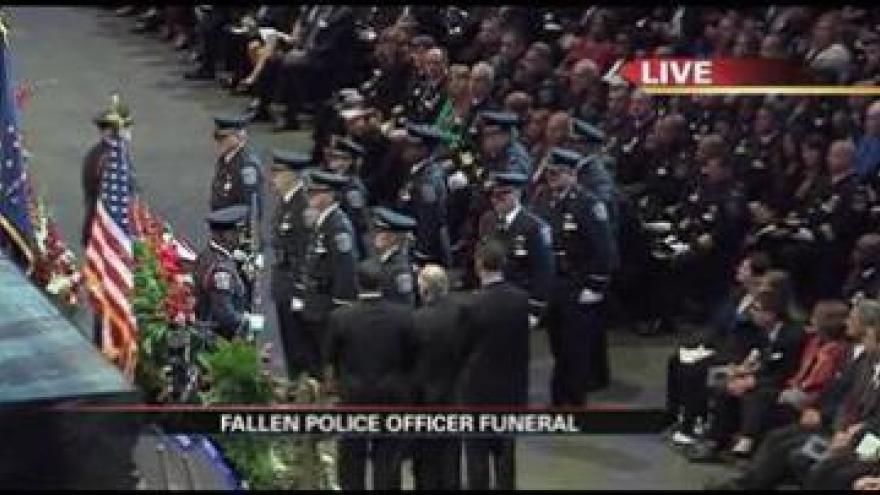 NAPPANEE, Ind. —Indianapolis Police Officer Rod Bradway, who was killed in the line of duty, was laid to rest in Indianapolis Thursday.

Bradway grew up in Nappanee and his parents still live there. Friends and family gathered in the early morning hours to travel the 150 miles to Indianapolis to attend the funeral.

It was held at Banker's Life Field House in downtown Indy.

Attending Bradway's funeral isn't how these Nappanee residents wanted to start their Thursday.

"It is a sad day," said Rhonda Khlotz, who was friends with the Bradways.

They shared memories of Rod Bradway, the Indianapolis police officer killed in the line of duty.

"He protected that lady and her child and he lost his life protecting someone else," said Khlotz.

Nappanee mayor Larry Thompson remembers him as a hero on the Northwood football field.

But Bradway's story doesn't have a happy ending.

His parents Sherri and Tom, both from Nappanee, quickly greeted the group on the way to their son's funeral the only way they knew how. They hugged.

"It felt good to hold her and just been praying for her this week that she is going through this and will continue to," said Janet Homan, Bradway's cousin.

Bradway's friends on the Indy force led this group from Nappanee even closer to his final resting place.

Bradway left behind a wife, two children and thousands of brothers in blue who filled Baker's Life Fieldhouse Thursday. Nine officers from Nappanee attended the funeral.

Among the short list of speakers that included Governor Mike Pence was Mayor Thompson. He said that although Bradway left Nappanee, his heart and his legacy will always live on in his hometown.

When he spoke, Indianapolis Police Chief Rick Hite said his officers will continue to fight the good fight so that Bradway's actions were not in vain. His actions saved the lives of a woman and child and that will never be forgotten.