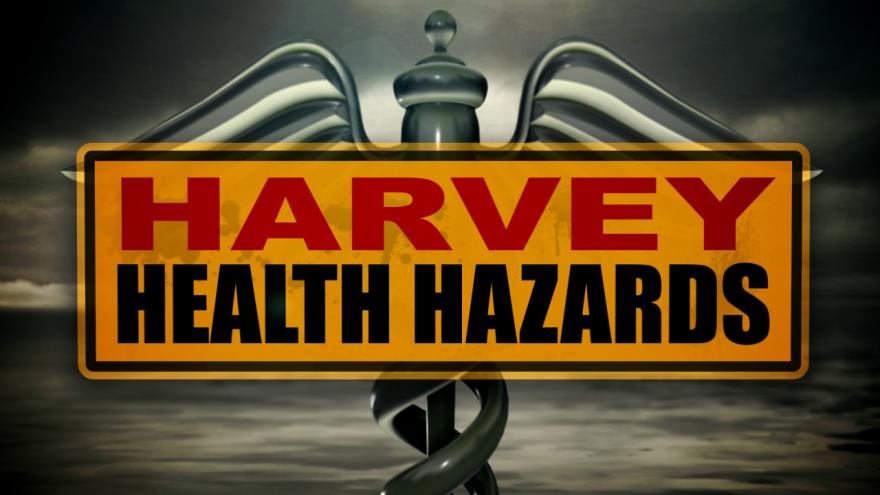 (CNN) -- Texas' dominant energy industry has spewed millions of pounds of pollution into the air in the wake of Hurricane Harvey, documents show.

Since the storm made landfall August 25, more than 5 million pounds of air pollutants have been released beyond the normally permitted emissions, according to a review of industrial companies' filings with the state's environmental authority by Neil Carman, a scientist who spent 12 years in enforcement at the state agency and now works with the Sierra Club.

Experts say the quantities of pollution are massive and are steadily rising as the oil and gas industries perform the pollution-intensive process of restarting operations that were halted by the storm. That process requires a greater than normal amount of "flaring" -- the burning off of gas byproducts at the ends of long chimneys that look like candles.

The documents, which are available on the Texas Commission on Environmental Quality's website, show other emissions were released when the lids on fuel storage tanks were compromised by the heavy loads of rainwater; the tank lids rise and fall with fuel levels, and the weight of the water pressed the lids beneath those levels, allowing chemical vapors to escape.

Experts note the scope of the discharges could be significantly larger than what has been reported.

"We're concerned about these (emissions), but also about what's not reported," said Cyrus Reed, the conservation director at the Sierra Club in Texas.

As Harvey hit Texas with devastating force, Gov. Greg Abbott ordered the state government to suspend some regulations, and signed off on relaxing the Texas Commission on Environmental Quality's requirements for "emissions event reporting."

That means many incidents may not have been reported, and "the numbers could really be much larger," Carman said.

"These are engineering estimates. I call these guesses," he told CNN.

Carman's review of the filings found 74 emission releases at 40 plants. One reason he believes the numbers represent only a fraction of the actual emissions: There are more than 800 oil refineries and gas production facilities in the region of Texas hit by Harvey that have flaring technology, and Houston alone has more than 1,000 flares, he said.

Another reason: The estimates are typically made using the assumption that 98% of the noxious substances are burned in the flaring process, which Carman says is unrealistic.

But many reports provide a murky view of what was actually released, specifying only that they were volatile organic compounds. Carman said that is "a big catch-all term" and may mean the polluter does not know what it released.

Public health experts expressed concerns about the health implications for people in the region and say the affects are already being noticed.

Air quality monitoring in the region was largely impossible during the storm, but as systems come back online, they're seeing concentrations higher than anything recorded "in over a decade," said Elena Craft, a senior toxicologist at the Environmental Defense Fund.

The Houston area has seen "six months' worth of pollution in a few days," Craft told CNN.

For example, a meter in the Houston area recorded 200 parts per billion of ozone at one point on Friday, a level the Environmental Protection Agency classifies as "unhealthy."

Ozone, which can cause respiratory problems, is created by chemical reactions between nitrogen oxides and volatile organic compounds (VOC) in the presence of sunlight, according to the EPA.

"We think a lot of it has to do with the excess VOC emissions that are coming from these facilities that are trying to come back online," Craft said. "People are complaining about noses burning, eyes watering, headaches, nausea."

The concern for people in the region hit by Harvey is not that any single carcinogen, like benzene or butadiene, has been released in large quantities, but that together these chemicals make "toxic cocktails" that hang in the air.

"It's not like someone is going to get cancer from the exposure yesterday," said Craft. "They're contributing to the long-term risk of cancer."

Authorities said they are monitoring an additional toxic concern in the region hit by Harvey: superfund sites.

These sites are considered the nation's most contaminated and are managed by a special federal cleanup program run by the Environmental Protection Agency.  In the region hit by Harvey, the sites include former chemical and waste-disposal sites.

The EPA said its initial surveys at 41 superfund sites in the affected area shows "13 sites have been flooded and/or are experiencing possible damage due to the storm."

Two of those sites "do not require emergency cleanup" and reviews of the other 11 sites will take place "as soon flood waters recede, and personnel are able to safely access the sites," the EPA said in a statement.

Abbott said on CNN's "State of the Union" Sunday that the EPA was prepared to go into these damaged sites "as quickly as possible" and cautioned people further about toxic substances in the waters all over, not just near the sites.

"These waters are filled both with chemicals, with waste and things like that, that can pose real health hazards," Abbott said.