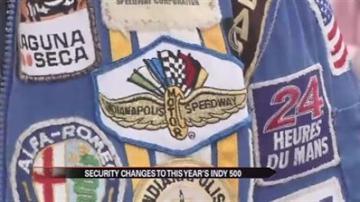 INDIANAPOLIS, Ind. -- The Indy 500 is hours away, but the race for safety has already begun.

Helicopters scanned overhead on Saturday, as thousands of fans marched in to take part in some pre-race festivities.

This year, fans can expect a big change.

In the wake of the Boston bombings, security at the speedway is tightening up. Big coolers full of beverages, a staple at past races, won't be allowed in.

"It's important, but it's theater," George Eggleston, a spectator from Houston, said. "Basically, we need to make people feel safer, whether or not what's actually happening makes them safer."

"Almost 400,000 people, and you have to provide safety for all of them," William Pickering, another spectator, said. "As a proud American like myself, I don't mind if I have to go through a little more scrutiny."

This year marks the 37th time Pickering has seen the race. With or without the cooler, he's expecting to have a good time.

"There's always something different and special about this race."

For first timers like Eggleston though, it's all about the mechanics and the history.

Some call the Indy 500 the birthplace of racing.

"A lot of the structures around here I recognize," Eggleston said. "Because I've seen them on T.V. forever."