Indy 500: What the secret to winning? 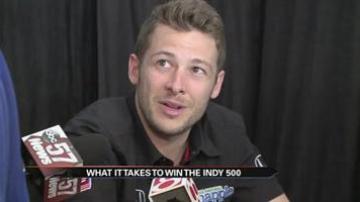 INDIANAPOLIS -- What does it take to win the Indy 500? We spoke with drivers and fans to learn what it takes to take the checkered flag.

Most said the race is about more than just speed and endurance. Drivers have to balance risk taking with advice from their crew.

A lot can happen when you're driving 230 miles per hour.

Throw in the pressure of doing it in front of 300,000 people and some drivers can crack.

“You need to drive this race like any other race. That’s where a lot of guys can go wrong - they get too antsy - make a move they shouldn’t have," said driver Marco Andretti.

He talked about the importance of practice, teamwork and having a good car - and luck.

“I’ve had superstar cars around here, but it takes more than that. You know, it takes lady luck, it takes the yellows to fall at the right time," said Andretti.

He and other long-time fans say the winning formula is patience and a solid crew chief.

“He’s going to set that car up good for the race conditions that they have. I think it’s amazing how these guys do it," said fan Mike Babineau.

Even more amazing are the drivers who finish first more than once.

Three-time winner Helio Castroneves is one win shy of a record.

“I still have a lot of fire, ya know?" said Castroneves.

He contributes a lot of his success to the flexibility his team gives him, but also - a change in mindset with the last few laps.

“Make moves, and be able to run whatever I want to run," said Castroneves.

“You only have to lead one lap here man, and that’s the last one," said Dixon.