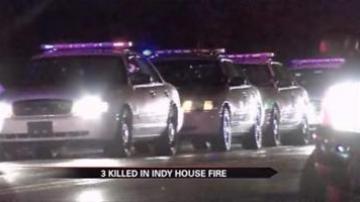 INDIANAPOLIS — Three people are dead after a house fire in Indianapolis on Sunday.

Officers say fire crews got a call from a man saying his house was on fire and there were people still inside of the home.

Investigators believe the fire may have started in the living room.

Neighbors say that there were generally five to six people living in the home at a time.

Fire officials added that there were no working smoking detectors in the home at the time.

The identities of the victims have not been released. But officials say one woman and two men died in the fire.