Indy tow truck takes car with child on board 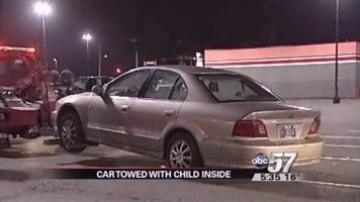 INDIANAPOLIS, Ind. – An Indianapolis woman and a tow truck driver are in big trouble with the law.

Robyn Hardy's illegally parked car was towed while her child was still inside the car. Hardy told police she was inside a Family Dollar store for only five minutes. Employees say it was more like 15.

That was enough time for a tow truck driver to tow her car into a lot. When he got out, he found her son inside.

The truck driver panicked, and took the car and the 7-year-old back.

Police say it was the tow truck driver's responsibility to check the car.  They also say he didn't secure the car properly to his truck.

"They have a responsibility to ensure that no one is in that car,” said Kendale Adams of Indy Metro Police. “That car could have fallen off and that child could have been seriously hurt."