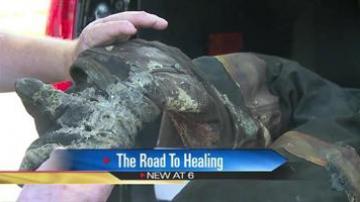 BENTON HARBOR, Mich. -- Former Benton Harbor Firefighter Lieutenant Doug Bell was trapped inside a burning garage while fighting a fire 18-months ago. Bell and his wife talked about how his injuries affected their family while visiting the site of the fire.

In March of 2013, Lieutenant Bell was fighting a fire at a home on Jennings Avenue when he found himself trapped in the burning garage.

"When I went through that door, the door slammed behind me and locked," said Bell. "That’s when my life changed."

Bell says he didn’t panic but he knew he was in trouble.

"I went back over and I started beating on the door. I tried to use the radio to call out and the radio was melted, the microphone was melted," said Bell.

It was a painful walk down memory lane.

"The pass device that we have has a temp setting and when that goes off it's at least 600 degrees. Once that went off I was like oh my God I have to get out of here," said Bell.

Bell says he was trapped in the garage for 5 to 7 minutes before he was pulled to safety.

He says his gear is a testament to how fortunate he is to be alive.

"You cannot see through this mask it's completely blackened," said Bell.

Bell says the last year and a half hasn’t been easy.

"From what one of the doctors said, the blood in both of my hands had boiled," said Bell.

He spent months in the hospital and over a year in therapy.

"I had trouble breathing, a lot of water gain. Ended up being two surgeries and I wasn’t ready for that," said Bell.

Healing has been difficult for the Bell family. But right now, their hearts break for the Middlebrook family.

"I know how that family feels and I did not want that to happen to my family and knowing that it happened to someone else - it's still emotional," said Bell.

Bell said Middlebrook's was difficult and hit home. He hopes to be able to connect with the Middlebrook family.