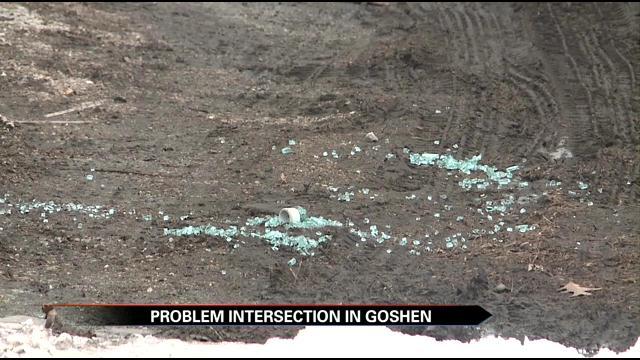 There have been over two dozen car accidents at the corner of South 15th Street and Plymouth Avenue in Goshen and there was another serious accident there Wednesday.

Goshen Police say since 2010 there have been 29 accidents at the intersection.

Wednesday's accident was caused by one of the drivers not stopping at a stop sign.

This incident makes people in the neighborhood afraid they will be the next person hurt if something isn't done.

“This is a dangerous, busy intersection,” says Jerry Gerzeski.

Gerzeski has lived on the southwest corner of South 15th Street and Plymouth Avenue since 2000. He says since then he has had four cars in his front yard after an accident.

One of the drivers was treated for pain and cuts.

The other was unconscious when she was taken to the hospital and now her conditions is being referred to as "guarded."

One of the cars landed in the yard of Erica Stump, whose house is located on the northeast corner of the intersection. Stump says this isn't the first time her yard has been the scene of a car accident.

“About a month and half ago somebody blew through the stop sign and ran into my garage - took it off the foundation,” says Stump.

Stump now has shards of glass just a few feet from her home. Stump and other neighbors have had close calls but none of them have been injured. They say it's time to bring attention to this problem intersection.

“My neighbor over here has had vehicles bounce off that big tree. They have had them go through his fence back to the back of his garage,” says Gerzeski.

A crooked fence, bent drain pipe, and damaged garage are evidence of past car accidents being too close for comfort.

“There are times I've sat there watching television in my living room wondering if a cars going to come through and hit me in my chair,” says  Gerzeski.

Gerzeski and Stump would like to see a four way stop or a stoplight at the intersection.