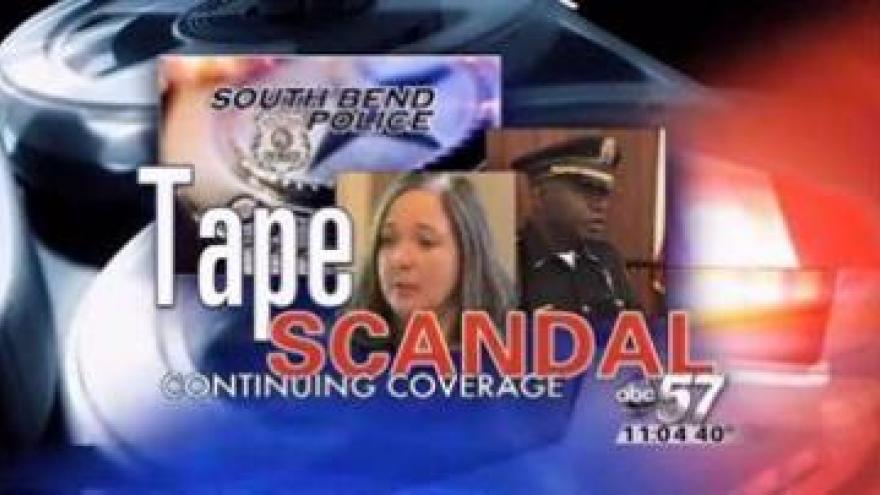 SOUTH BEND, Ind. – Three weeks after her termination, former Director of Communications for the South Bend Police Department, Karen DePaepe, gave details on the origins of the now infamous telephone conversations recordings at the department that caused a federal investigation.

DePaepe agreed to discuss with us how the recordings came into existence; she would not divulge specific details about what was said on them.

But to understand the end, we must start at the beginning.

Back in the 1980s, the police department would record 911 phone calls and the police radio channels on a Dictaphone reel-to-reel machine.

One day’s worth of phone calls would take up a single reel which was at first saved for 30 days, later that number was increased to 90 days.

In the late ‘80s, however, digital recording became the medium of choice for such services, but it wasn’t until 1998 that the South Bend Police Department abandoned the reels for computers.

It was at that point, the department began saving recorded information for three years.

That was also the same year DePaepe was promoted to the Director of Communications position.

The machine that took the place of the reel-to-reel was the DI Reliant made by Dynamic Instruments.

According to DePaepe, shortly after the O.J. Simpson trial, it seemed everyone wanted to get a copy of a 911 tape for their case.

The new system made searching for recorded information much easier.

Instead of listening through the reel, DePaepe could start looking for a requested call with a few clicks of the mouse.

The system segregated each incoming source, whether it was a phone line or radio frequency, into its own individual channel; something the reel-to-reel system could not do.

Ultimately, it was left up to the Chief of Police Darrell Gunn to decide what would be recorded. According to DePaepe, she had nothing to do with the original configuration on the computerized system.

It was shortly after that, when Chief Gunn was involved in a drunk driving accident and was replaced for a short time by Brent Hemmerlein and then shortly thereafter by Larry Bennett.

In both cases, DePaepe gave the men a list of what was being recorded (radio frequencies and phone lines).

According to DePaepe, Hemmerlein made no changes to the list; and he ended up in the Records Bureau while he was being investigated in relation to Gunn’s DUI.

When Bennett was made Chief of Police, and DePaepe presented him with the list; he added the Records Bureau Captain’s phone line to the list of lines he wanted recorded.

He never gave her a reason why he wanted the line recorded, just that he did, and without any previous guidance from the legal department, or any policies in place other than a blanket The-Chief-Has-The-Final-Say, she made arraignments to have the line added.

Adding or removing a line is not something DePaepe was trained to do. All adding and removing of lines to the system was done by outside technicians who would be hired through the recording system’s vendor.

Eventually Chief Bennett was succeeded by Chief Thomas Fautz; he too made changes to what was being recorded and what was not.

One of the first things he wanted to add to the recorded list was one of his own phone lines in his office.

This time DePaepe was given a reason for the request. At the time, the department would receive a lot of calls with allegations towards officers, according to DePaepe.

They would also get some callers who may have witnessed a crime that really didn’t want to come forward but wanted to provide information. “It seemed like a good thing to do, at the time the system was always on, 24/7,” said DePaepe.

The premise was, the lines were set up to record those calls as part of the everyday operations of the police department.

During Fautz tenure as Chief of Police, other lines were added and removed from the list; each at his command.

He had also showed interest in recording the back squad room phone.

At the time, there were supposedly a number of officers making long-distance phone calls on the line and they may not have all been work related.

However, instead of recording the line, it was decided to simply remove the long-distance capabilities on that phone line.

At one point, the lines in the patrol office were recorded and the officers were making a lot of personal calls on them, according to DePaepe.

When the department upgraded the recording system, those lines were removed from the list of recorded lines.

As with the Chiefs who came before him, DePaepe gave him the list of recorded sources and asked if he wanted to make any changes. Boykins made no changes.

Eventually, a Captain in the Investigations Bureau is promoted from within and becomes the new Division Chief.

He asks Boykins Administrative Assistant to arrange it so he can keep the line he had while he was a Captain; since all of his contacts had that number anyway.

Boykins Administrative Assistant made the necessary calls to have a technician come out and do the work, but neglected to notify Depaepe of the change.

Because DePaepe was not notified of the switch, every phone call to the new Captain’s line was recorded instead of the calls coming in to the new Division Chief’s line as was intended under the way Fautz had set the system up.

This went on for a year before DePaepe figured out what had happened.

Because DePaepe is the custodian of the recordings, it is her job to maintain the physical equipment so the department can continue to fulfill its legal obligation to satisfy Freedom of Information Act (FOIA) requests.

In early 2011, the system began to show signs of eminent failure; much as the previous system had several years prior.

Backup drives were crashing, parts were breaking, and replacing the parts was getting difficult.

In February, after a third attempt at fixing the problem, DePaepe noticed the system seemed to finally be stable again.

But, DePaepe was concerned that some of the data may not be recording properly because they were still having occasional freezing and crashes.

She started checking each of the channels to make sure they were recording the vital information the department is required to store.

Depaepe was faced with two problems; first the wrong line (or so she thought) was being recorded.

At first, she thought the last technician may have accidentally routed something wrong or made a change she was unaware of; so she checked the recordings from before he would have done the work.

The same person was making and taking calls on the line even before the technician had helped fix their equipment issues.

Then she thought, perhaps this person was simply using the Division Chief’s phone line, but that turned out not to be the case; and that is when she found out the lines had actually been switched a year earlier.

The second problem DePaepe faced was the content of the conversations recorded on that line.

Again, DePaepe would not speak to specific details of what was said in the recordings; but she did indicate she felt some of the comments aimed at Chief Boykins were racist.

Other comments were purely unethical and potentially illegal, according to DePaepe.

When asked if she could confirm that Boykins was not the only person targeted with derogatory remarks in the recordings, that Pete Buttigieg was also the object of ire, DePaepe replied after a long thoughtful pause, “It wasn’t positive, we’ll just say that. They were not positive comments in any manner.”

DePaepe would struggle with deciding what to do about the discovery of such inflammatory material on a system that is open to public scrutiny via FOIA requests.

As we all now know, DePaepe decided to bring the information forward, but not in a grandiose way. She kept the information internal and the Chief was informed, and even the press didn’t get wind of it until a year later, and only then after Mayor Buttigieg forced Boykins to resign.

Two weeks later Buttigieg’s Chief of Staff, along with Rich Hill (the special counsel Buttigieg commissioned to advise him in matters related to the federal investigation) fired DePaepe as Interim-Chief Chuck Hurley sat silently at the end of the Mayor’s Conference Room table.

Ironically, Buttigieg has stated several times he has not listened to the recordings; and that he has been advised doing so would be illegal.

Meanwhile, DePaepe recalls the denial of her request for 10 minutes of Buttigieg’s time prior to her termination; and wonders if her request had been granted, how differently things would have worked out.