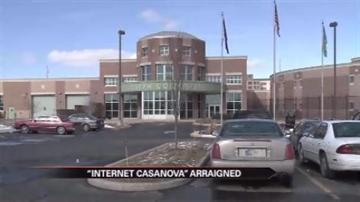 ST. JOSEPH COUNTY, Ind. -- The alleged Internet Casanova was in court for his arraignment on theft charges Friday. Also in court was his former girlfriend and the one who called police on him.

At first, Theresa Bridegroom didn't want Raymond Holycross to know her role in his arrest.

"I didn't know if he was going to get out of jail that night, or the next day, and I didn't know where he would go,” said Bridegroom.

After it became clear that he was not getting out of jail before he went before a judge, her attitude changed.

"I wanted to see the look on his face when the judge read what he was being charged with,” said Bridegroom.

Bridegroom saw him read through the charging documents at his arraignment and learn that she was the one who went to police because he allegedly stole and pawned her camera.

"He kind of had a look of disgust, like he couldn't believe that I had charged him,” said Bridegroom.

Bridegroom says while they dated, Holycross would urge her not to dwell on the past.

Instead, he advised her to move on and be strong and to fight for what she wanted.

Now she is fighting to make sure he pays for the crimes she says he's committed.

"Part of me wanted him to see that, but we'll have our day that he'll see me in court, so I'm not backing down,” said Bridegroom.

When the judge asked him if he would be getting a private attorney, Holycross asked for a public defender because he was "recently unemployed."

Holycross will be in court again on March 12 for a hearing.