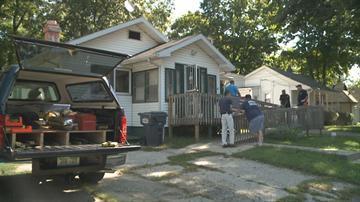 Police say the woman, Lola Dodson died from smoke inhalation at her home at 118 Hendryx Street Tuesday night. Investigators said Wednesday a discarded cigarette likely started a trash fire in the kitchen of the home and Dodson was unable to escape.

Other than smoke-stained drapes seen through her broken windows, there wasn’t much visual evidence of a fatal fire at Dodson’s home Thursday afternoon.

“(I saw) a lot of fire trucks over there,” said neighbor Barry Fowler. He said while firefighters were at the house, just after 11 p.m. Tuesday, there wasn’t much to see. “I didn’t see any flames,” he said.

According to Deputy Chief Guy Evans with the Dowagiac Fire Department, responding fighters found plumes of smoke inside and Dodson unconscious in her wheelchair. Medics took Dodson to nearby Borgess Memorial Hospital where she was pronounced dead.

Thursday Dodson’s family walked up and down a wooden ramp to gather things from inside the home. A man who identified himself as Dodson’s son told ABC 57 News that Dodson was an amputee and lived alone. He said the ramp was her only access to and from the house.

“She was mostly in the house,” said 14-year-old neighbor Eric Walker. He said he hardly ever saw Dodson outside.

“She was home-bound,” said Fowler. Other than a few nurses visiting the house to check on her well being, Fowler only saw Dodson outside a handful of times.

“She was obviously able to call for help but unable to help herself,” said Evans. He said Dodson alerted emergency crews with a life alert system that she carried with her. “The chair (Dodson was found in) was just in a room facing another chair,” he said. “We don’t know if she had moved at all.”

Investigators found no working smoke detectors in the home. The fire started in the rear kitchen of the building and Dodson was found in a front room. “It’s hard to say whether that would have made a difference in this case but we obviously highly encourage people to have working smoke detectors,” said Evans.