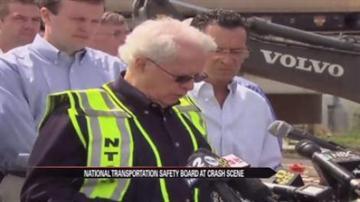 BRIDGEPORT, Conn. — National Transportation Safety Board investigators are at the scene of the Connecticut train collision. The accident happened Friday during rush hour.

The collision happened when a train traveling from New Haven, Conn. to New York derailed. It then hit a train heading the other way.

Dozens were injured with at least 70 people needing medical attention.

Local officials say it could take weeks before train service is running again.