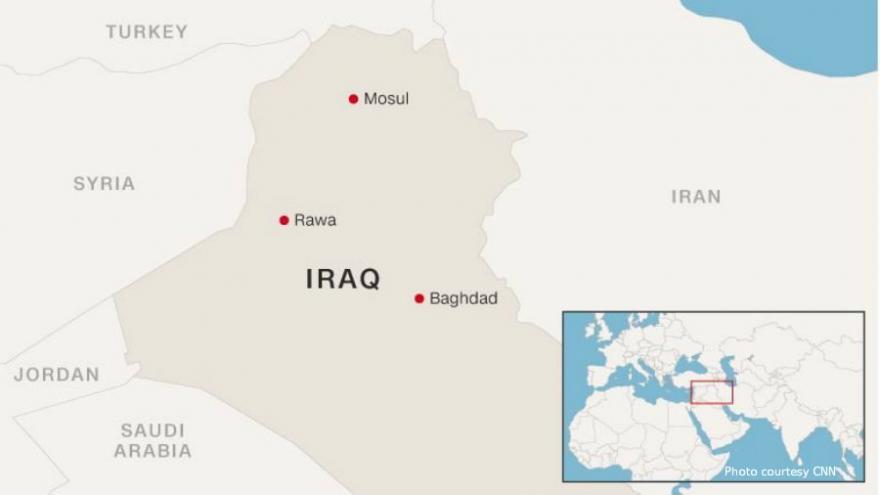 (CNN) -- Iraqi forces have retaken the town of Rawa from ISIS, one of the militant group's last footholds in the country.

The Iraqi national flag was raised over Rawa around midday Friday, Iraq's Joint Operation Command (IJOC) said in a statement.

A spokesman for the command told CNN that engineers laid down a pontoon bridge across the Euphrates River around dawn to allow Iraqi forces to cross near the outskirts of the town.

Located in Anbar province in the Euphrates valley, Rawa was the last known Iraqi town still held by ISIS militants. Recapturing it means ISIS has been defeated in all of the country's towns and cities, though pockets of resistance still exist and the group does control some territory in the deserts of western Iraq.

Haider Al-Abadi, the commander in chief of Iraq's armed forces, said in a statement the "liberation of Rawa district in mere hours reflects the great strength and power of our heroic armed forces and the successful planning for battles."

ISIS on the brink

The push to liberate Rawa comes after ISIS was pushed from Qaim, its last major stronghold in Iraq, earlier this month.

The news of Qaim's liberation came the same day the Syrian military reportedly took back control of Deir Ezzor, the terror group's last-held city in that country.

Both Qaim and Rawa are located in western Iraq, near the Syrian border, where ISIS holds the last of its territory -- the remnants of its so-called caliphate.

In 2014, ISIS controlled more than 34,000 square miles in Syria and Iraq, from the Mediterranean coast to south of Baghdad.

By the end of 2016, ISIS territory had shrunk to about 23,320 square miles, according to IHS Jane's, and this year concerted operations by Syrian and Iraqi government forces have freed even more cities from ISIS control.

In an August visit to Iraq, US Secretary of Defense James Mattis said "ISIS is on the run and they have been shown to be unable to stand up to our team, have not retaken one inch of ground."

The campaign to eradicate the Islamic State has taken three years and nearly 25,000 coalition airstrikes, in addition to thousands by Russian, Iraqi and Syrian aircraft.

In a statement Friday, the International Rescue Committee (IRC) warned the recapture of Rawa doesn't mean an end to the needs for civilians.

"Today marks a historic day for the people of Iraq. It is, however, vital that the international community does not view the end of ISIS' territorial control as the end of their responsibility to the Iraqi people who have endured years of conflict and face a long, difficult recovery," IRC's Iraq country director Wendy Taeuber said.

"Across the country, over 11 million people remain in need of vital humanitarian assistance and will continue to need support as they begin to recover and rebuild their lives. Funding for this crisis must be maintained. We must not turn our backs on the people of Iraq."