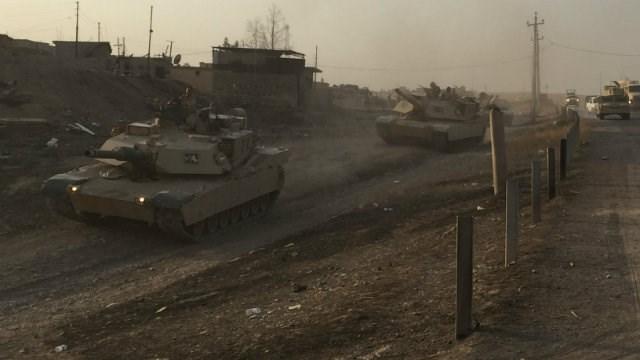 NEAR MOSUL, Iraq (CNN) -- In the push to free Mosul, Kurdish Pershmerga forces ideally wanted a political plan -- not just a military one -- to help retake the city from ISIS, Iraqi Kurdish President Massoud Barzani said.

"We would have loved to have a political plan along with a military plan, how to manage Mosul, how to administer Mosul, because Mosul has a variety of religions, with ethnicities," Barzani told CNN's Christiane Amanpour on Wednesday.

But he acknowledged that having one probably "would have taken a longer time."

The operation to free Mosul from two years of ISIS rule marks the first time Kurdish Peshmerga and Iraqi forces have fought against a common enemy, Barzani said.

"We are looking for a good solution for Mosul," he said.

But the battle to free Iraq's second-largest city could be marked with months of bloody fighting.

On the road to Mosul, Iraqi-led forces have besieged a Christian town in an attempt to liberate it from ISIS control, but they are facing fierce resistance and exchanging heavy gunfire with militants, a paramilitary general told CNN.

Iraqi security forces, Peshmerga fighters and a Christian paramilitary group have forced ISIS fighters into the center of Qaraqosh, where airstrikes are pounding the militants, in apparent coalition support of the assault, Gen. Amr Shamoun from the Christian militia group said.

It's the latest clash with ISIS militants in the coalition's aggressive push toward Mosul aimed at unshackling the strategic city from the terror group's brutal control.

The operation has been complicated since ISIS apparently brought civilians into Qaraqosh, which was abandoned after militants took over in 2014.

Part of Qaraqosh has already been liberated, Shamoun said.

Qaraqosh is just one town coalition forces are trying to liberate. The Iraqi army's armored division is closing in on Mosul's fringes after sweeping through enemy-controlled land in two days, freeing communities village by village, the division's commander told CNN on Wednesday.

• The armored division has advanced; it is now three to four miles from the outskirts of Mosul.
• Three brigades have liberated 13 villages to the north and northeast of Quwayr.
• At least 50 ISIS militants and two Iraqi soldiers have been killed, and 25 soldiers injured.

• Dozens of suicide vehicles and a large number of improvised explosive devices have been destroyed.

Qaraqosh was a Christian town, home to 50,000 before ISIS took control. An exodus saw thousands flee to Mosul, only to be forced out again when ISIS took that key city.

Many of those who fled are now living in Irbil, where they celebrated Tuesday when they heard Iraqi forces had entered their hometown.

They held a vigil overnight, holding candles and singing hymns, images showed, while others gathered in the street, cheering and dancing.

But their celebrations may have come too soon. ISIS appeared to be putting up a real fight in Qaraqosh, as the terror group has in several areas since the operation launched Monday.

Another Iraqi military official, speaking on condition of anonymity, told CNN that ISIS fighters have surrounded Iraqi units around the village of Al Absi, near Nimrud, 12 miles (20 kilometers) south of Mosul. The area has seen heavy fighting in the last 36 hours.

Voices from Mosul: 'We want life back to normal'

Maliki, the Iraqi commander, said his division was around three to four miles (five to six kilometers) from the city's outskirts. He said progress had slowed as protective forces were needed in newly liberated areas to hold ground.

His comments echo those of Sirwan Barzani, a Peshmerga military commander, who told CNN the battle to recapture Mosul could take two months.

Barzani said it would likely take two weeks for advancing forces to enter the city. Iraq's leaders have said that only Iraqi government troops and national police officers will be allowed to do so amid fears of sectarian retribution, he said.

The coalition's more than 94,000 members vastly outnumber their opponents. But ISIS, expecting the push, has constructed elaborate defenses, including a network of tunnels.

Advancing Iraqi forces sometimes encounter ISIS fighters who seemingly pop out of the ground to fire weapons. The tunnels wind through hills, with one entrance not far from an exit.

Up to 5,000 ISIS fighters are in Mosul, a US military official said. ISIS' supporters put the number at 7,000.

A US general said some local ISIS leaders are fleeing.

"We are telling Daesh that their leaders are abandoning them, and we have seen movement out of Mosul," US Army Maj. Gen. Gary Volesky said in a video briefing from Baghdad, referring to ISIS by another name.

A unit of what appeared to be US special forces advisers entered ISIS territory Monday with the first armored convoy of Peshmerga, a CNN team observed. They followed a dozens-strong unit of Kurdish armor bound for ISIS positions, placing American forces at the front of the fight to retake Mosul.

Residents from freed villages -- Iraqi flags waving from their buildings -- have begun celebrating cautiously. In one on Mosul's outskirts, people fled in panic when rumors swirled that ISIS was coming back.

Al-Adla, which is about 31 miles (50 kilometers) southeast of Mosul, had been retaken by the 9th armored division, which had marked it free of ISIS and moved on to liberate other small settlements in the area.

Around 200 residents fled to hide out behind a sand berm. Among a group of women there, some told CNN they saw ISIS fighters re-emerge from orchards.

"Every day they would come to us and ask, do you have guns? So you have mobile phones? Give them over," one woman said, in anger and fear.

"Whoever they found with a mobile phone they would kill. They starved us. They'd kill people who would smoke. We were so happy when the army came," another said.

After CNN spoke to the community members, they heard it was safe to return and began collecting their belongings to march back together.