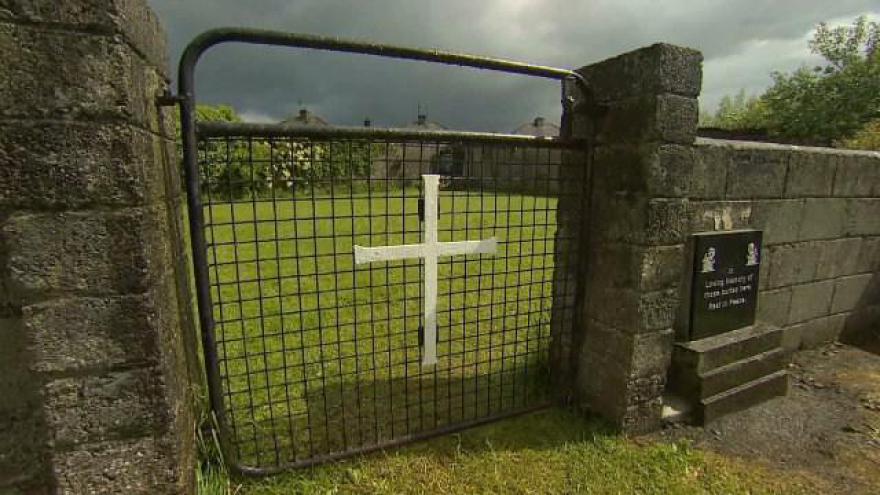 An investigation was opened following public outcry when a local historian said in 2014 that she believed the bodies of 800 children could be buried on the site of the former St. Mary's Mother and Baby Home in Tuam, County Galway.

The remains were found in the chambers of an underground structure next to a septic tank which could have been used for sewage storage or treatment, the Commission on Mother and Baby Homes said in a statement Friday.

"The Commission is shocked by this discovery and is continuing its investigation into who was responsible for the disposal of human remains in this way," the statement said.

The institution, which operated from 1925 to 1961, was run by the Sisters of Bon Secours. Its former site is now part of a housing estate.

Radiocarbon dating of a small number of remains recovered for analysis indicates that they date from the time the home was in operation, with some likely to date to the 1950s, the commission said.

Testing indicates that the individuals involved ranged in age from 35 weeks' gestation to 2 or 3 years in age, it said. More tests are being carried out.

Katherine Zappone, Minister for Children and Youth Affairs, said the commission would continue to look into burial procedures at the home following the "sad and disturbing news" announced Friday.

"Up to now we had rumors. Now we have confirmation that the remains are there, and that they date back to the time of the Mother and Baby Home," she said.

Local residents and "other interested parties" will be consulted about should happen next with the remains, she said.

Responding to news of the discovery of human remains, rights group Amnesty International called on the Irish government to ensure that alleged human rights abuses at former "mother and baby" homes across Ireland were fully investigated.

"Today's distressing revelations underline the need to ensure that this Commission of Investigation is a meaningful opportunity to finally and fully ensure truth and accountability for what happened to women and children in these institutions," said Colm O'Gorman, executive director of Amnesty International Ireland.

Ireland's mother and baby homes existed until as recently as the 1980s. The government has promised to investigate allegations of ill treatment of those who stayed there.

Catherine Corless, the local historian whose research uncovered the likely existence of the remains on the home's former site, told CNN in 2014 that she couldn't believe there were no burial records for 796 children whose deaths were recorded at the home.

Corless showed CNN a 1947 state inspection report on the home in which there are several descriptions of "emaciated" children. One child is described as so thin that "flesh hanged loosely from limbs." Records showed causes of death that included measles, meningitis and whooping cough.

Representatives of the sisters of Bon Secours told CNN in 2014 that they were shocked and saddened by the reports and that they supported an inquiry into what happened.