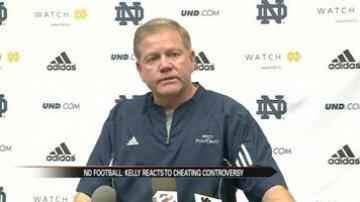 NOTRE DAME, Ind.-- Head Coach Brian Kelly says the matter is out of his hands when it comes to Irish quarterback Everett Golson's decision to interview with Sports Illustrated because Golson is not a part of this year's team nor is he currently enrolled at the University of Notre Dame.

“If he’s here on campus and he’s in our program and he’s under my charge, I’m really good at giving advice, but he’s not in the program right now so I’m not giving [advice]. Those are his decisions that he’s free to make,” Kelly said.

Golson was suspended from Notre Dame last May after violating the university's honor code.

"Basically I had poor judgment on a test. It wasn't due to poor grades or anything like that," Golson admitted to Sports Illustrated's Andy Staples.

Golson can reapply to Notre Dame for the spring semester of 2014, which starts in January, but Kelly says he may actually be back in South Bend much earlier than that.

“From what I’m hearing is that he’s trying to make his way back here sometime in the next few weeks,” Kelly said.

If Golson is accepted to return to Notre Dame, he will be able to rejoin the Fighting Irish not only in the classroom, but also on the practice field.

“Let’s say he’s admitted back into school on December 15, he would be eligible to practice...if that’s the case then we would practice him in some fashion, but he would not be eligible to compete,” Kelly said.

Golson has been training with a private quarterback coach over the past two months, something he says he hopes makes him a better quarterback if he returns to Notre Dame.