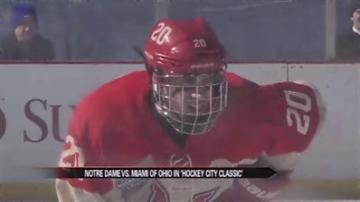 CHICAGO, Ill. - The Notre Dame men's hockey team returned to its roots Sunday; playing outside at Soldier Field in Chicago for the Windy City Classic. It's the first time the stadium has ever hosted a collegiate hockey game.

The Fighting Irish won 2-to-1.

Fans from all over the Midwest gathered at Soldier Field on Sunday to cheer on Notre Dame and Miami of Ohio as the two battled one another outside in the Windy City.

"Anything can happen," Ian Senne, an Irish fan, said. "It depends on how the ice is."

Things got a little chippy early on with nearly a dozen penalties recorded in the first period alone.

"It doesn't matter what team you cheer for," Abby Martin, a tailgater, said. "It's fun to be outside and be cold all together."

The Irish scored midway through the second period, but the Redhawks came back with a goal of their own to make it interesting.

"Our goalies have done really well in keeping things blocked," Wolff said. "But hopefully we can really and get some offense going early on."

But in the end, Notre Dame was too much for Miami to handle; locking up the win with a second goal in the final period.

"What better spot to be in then right here in Chicago where we belong," Jon Lindstrom, an Irish hockey fan, said. "It's an Irish city, it's the Southside Irish nation. We're going to make it happen in our home city."