Irish looking forward to moving on from defending the option 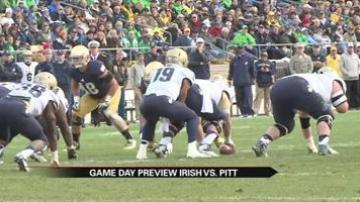 NOTRE DAME, Ind.-- After two weeks in a row of defending option offenses, the Fighting Irish are finally getting back to more traditional football, but they say they are taking what they have learned on the road to Pittsburgh.

“We’re excited, but I would go back and say that playing the option shows us that we have to play with discipline and we’ll have to go out there and play our fundamental assignments and everybody has to play their key role,” Irish defensive lineman Stephon Tuitt said.

Teammate Sheldon Day agrees that defending the triple option has helped the Irish.

“It’s more of a hand game, get keyed in on how to use your hands, where to put your hands, feet action, so it’s definitely something you can keep from playing option offenses," Day said.

In Pitt's last game against Georgia Tech, the Panther offense had a loss of five yards on 21 carries, putting up a total of ten points on the board, but the Irish defense says they aren't underestimating their opponent.

And Day described the kind of matchup football fans can expect to see at Heinz field this Saturday.

The Irish are ranked number 23 in the nation going into this weekend's game, with a defense that holds their opponent to an average of 23 points per game.